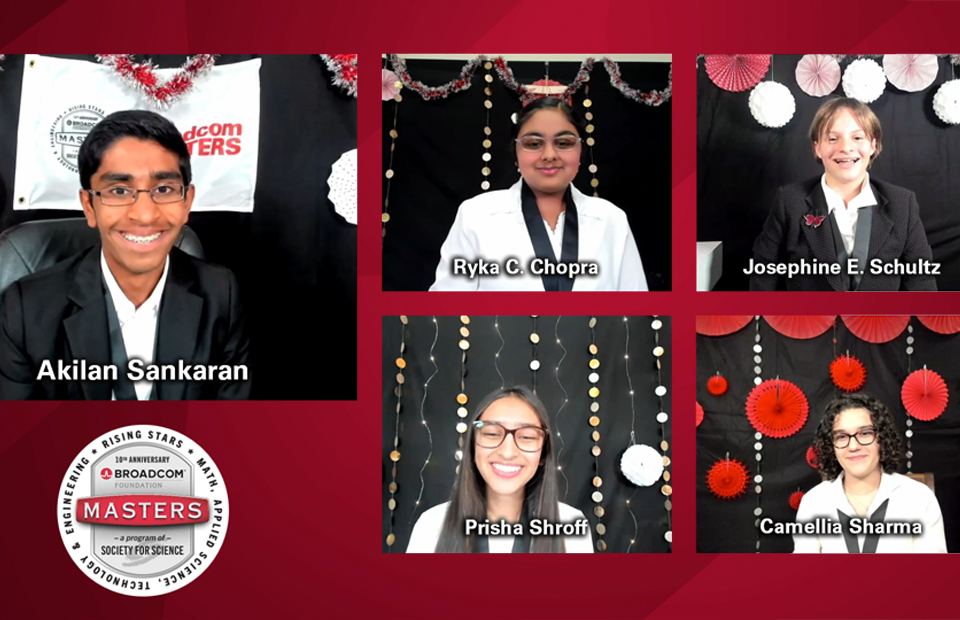 Broadcom MASTERS Awards $100,000 in Prizes, Inspiring and Rewarding the Nation’s Next Generation of Scientists, Engineers and Innovators

Akilan wrote a computer program that can calculate “highly divisible numbers,” sometimes called antiprime numbers, that are over 1,000 digits long. He created a new class of functions — the smooth class — to measure a number’s divisibility. Akilan’s program has the potential capacity to speed up and optimize the performance of software and apps, such as Shazam. By analyzing and developing smooth highly divisible numbers, Akilan’s goal was to make calculations run more quickly, in turn accelerating countless everyday processes and tasks.

The other top winners took on issues ranging from wildfires to obesity to water and light pollution.

The Broadcom MASTERS (Math, Applied Science, Technology and Engineering for Rising Stars), a program of the Society for Science, inspires middle school students to follow their STEM passions through to exciting college and career paths. Thirty finalists, including Akilan, took home more than $100,000 in awards.

The competition took place virtually to keep the finalists, their families and the Society staff safe during the ongoing coronavirus pandemic. Each of the 30 finalists participated in online team challenges in addition to being judged on their science research projects. The challenges leveraged project-based learning and tested their mastery of 21st Century skills of critical thinking, communication, creativity and collaboration in each of the STEM areas. The finalists analyzed biodiversity in their local communities, designed clinical trials, constructed gliders and developed functional programs using Raspberry Pis.

“Congratulations to all our Broadcom MASTERS winners,” said Maya Ajmera, President and CEO of the Society for Science and Publisher of Science News. “The young people we are celebrating today are working to solve the world’s most intractable problems.  The Broadcom MASTERS finalists serve as an inspiration to us all, and I know they will all go on to find immense success on their STEM journey.”

“The finalists competing in the Broadcom MASTERS this year are exceptional. Many completed their research projects and engineered prototypes without access to hands-on resources, which were limited by the COVID-19 pandemic. Nonetheless, they persevered and did not allow these challenges to hinder their passion to explore scientific problems or create engineering solutions,” said Paula Golden, President of Broadcom Foundation. “The entire Broadcom family congratulates Akilan and the Broadcom MASTERS Class of 2021.”

Akilan Sankaran, 14, Albuquerque, New Mexico, won the $25,000 Samueli Foundation Prize, for his computer program that can calculate “highly divisible numbers,” sometimes called antiprimes, more than 1,000 digits long as well as his leadership, collaboration and critical thinking skills. The prize is a gift of Dr. Henry Samueli, Chairman of the Board, Broadcom Inc., and Chair of the Broadcom Foundation and his wife, Dr. Susan Samueli, President of the Samueli Foundation.

Camellia Sharma, 14, Henrico, Virginia, won the $10,000 DoD STEM Talent Award for demonstrating excellence in science, technology, engineering or math, along with the leadership and technical skills necessary to excel in the 21st Century STEM workforce and build a better community for tomorrow. Camellia built a 3D-printed aerial drone/boat that can fly to a spot, land on the water and take underwater photos. Her software can then count the fish living there.

Prisha Shroff, 14, Chandler, Arizona, won the $10,000 Lemelson Award for Invention, awarded by The Lemelson Foundation to a young inventor who creates a promising solution to a real-world problem. Prisha developed an AI-based wildfire prevention system that uses satellite and meteorological data to identify fire-prone locations and deploy drones there.

Josephine E. Schultz, 14, San Antonio, Texas, won the $10,000 Marconi/Samueli Award for Innovation, an honor made possible by Samueli’s generous donation of his 2012 Marconi Society Prize Award. The finalist demonstrates both vision and promise as an innovator, in the spirit of radio inventor Guglielmo Marconi. Josephine studied painted lady butterflies and found that changes in light patterns can affect their emergence from their chrysalises by up to two days.

Ryka C. Chopra, 13, Fremont, California, won the $10,000 Robert Wood Johnson Foundation Award for Health Advancement, which recognizes the student whose work and performance shows the most promise in health-related fields and demonstrates an understanding of the many social factors that affect the health of communities. Ryka geocoded the locations of fast-food restaurants to see if they are built near populations of obese people, perhaps contributing to the obesity cycle.

Broadcom MASTERS winners were chosen from the 30 finalists selected from 1,841 applicants from 48 states, Washington, D.C. and three U.S. territories (Puerto Rico, Guam and the Virgin Islands). Winners were selected by a panel of distinguished scientists, engineers and educators. Each finalist’s school will receive $1,000 from the Broadcom MASTERS program to benefit their STEM initiatives.

In addition to the top prizes, the Broadcom Foundation and the Society also announced the winner of the $5,000 Broadcom Coding with Commitment Award, first and second place winners in each of the STEM categories of Science, Technology, Engineering and Math. The organizations also named the two Rising Stars who will be the U.S. delegates at the 2022 Broadcom MASTERS International and official observers to Regeneron International Science and Engineering Fair (ISEF) and the winners of the Team Award, sponsored by TIES.

In recognition of their promise as two of the youngest competitors, two Rising Stars win the opportunity to represent the U.S. as a delegate to Broadcom MASTERS International. Delegates will attend the 2022 Regeneron International Science and Engineering Fair (ISEF), the world’s largest international high school science fair competition.

Team Award, sponsored by TIES: Each member of the team that best demonstrates their ability to work together and solve problems through shared decision making, communication and scientific and engineering collaboration will receive a gift card to a science supply company to support their interests in STEM. The team award is sponsored by TIES, Teaching Institute for Excellence in STEM.

The Broadcom Leadership Award is bestowed upon the Broadcom MASTERS finalist elected by their peers to speak on behalf of their class at the Awards Ceremony. The Class Speaker demonstrates the collegiality and spirited leadership that has earned the collective esteem of the class throughout the Broadcom MASTERS competition and united them around common goals.