Read our interview with Luiz below to learn more about these interfaces, his current research on a method to communicate with people in comas, and why he chases utopias.

DESCRIBE YOUR BRAIN-MACHINE INTERFACE RESEARCH: Since last year, I’ve developed brain-machine interfaces inspired by the work of Brazilian neuroscientist Miguel Nicolelis. I realized that all the love, hate, masterpieces, every symphony, every act of bravery, every act of cowardice — all that humanity has done or will do is orchestrated by billions of cells that produce electrical storms.

All that humanity has done or will do is orchestrated by billions of cells that produce electrical storms.

Since 2015, I knew I wanted to research biomedical engineering and I fell in love with neuroscience. At Intel ISEF 2015, I had the opportunity to represent Brazil. I showcased a statistical model applied to thermodynamic processes in DNA amplifiers.

I was inspired by an episode of House, where phantom-limb syndrome (PLS) was discussed. I saw that PLS and techniques of brain-machine interfaces could be applied to increase the control efficiency of upper-limb prosthesis with tactile feedback.

WHAT ARE YOUR CURRENT STEM GOALS: I’m finishing articles for publication describing my new method to control robotic limbs and DNA amplifiers.

My goal is to become a neuroengineering researcher and build devices that can assist in the treatment of nervous system diseases, or even transcend the human ability to think, retain information, and control devices by thoughts. I’m working on developing a method that can make bedside communication possible with people who were diagnosed as being in a vegetative state. My advisor for this current research, Lucas Trambaiolli, was a 2006 Intel ISEF alum.

I used to watch the [Intel ISEF] Grand Awards ceremony live on the Internet, always wanting to be on that stage.

Unfortunately, Brazil is still not the best option at the graduate level for those who crave careers in neuroengineering like me. So I started the process of applying for U.S. universities. It was very interesting when I realized that I’d be more prepared for the application process for a university abroad through my extracurricular activities than for Brazilian universities with only one criteria — a test score. I plan to study biomedical engineering and neuroscience in America. 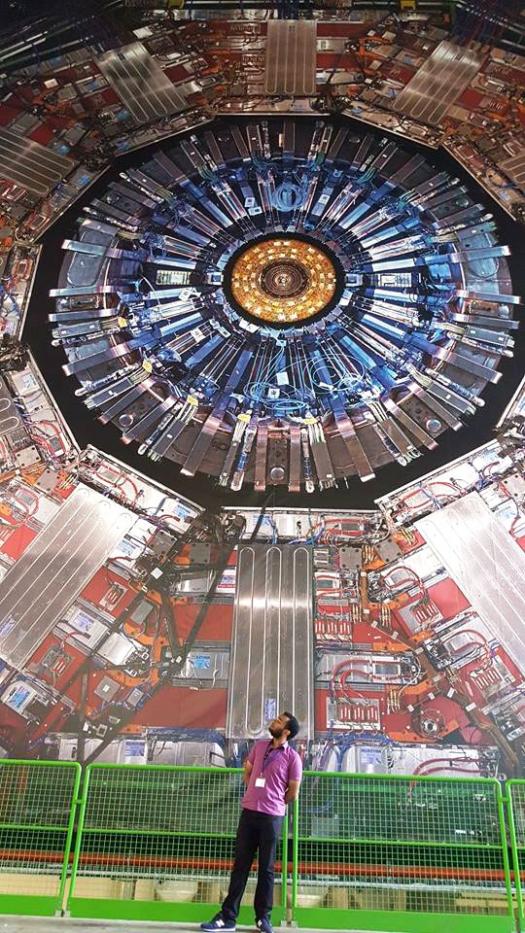 Luiz got to visit CERN during his trip to Europe.
PHOTO COURTESY OF LUIZ FERNANDO DA SILVA BORGES.

ON ACHIEVING HIS CHILDHOOD DREAM TO GO TO INTEL ISEF: I achieved a childhood dream in 2015 when I attended Intel ISEF. I used to watch the Grand Awards ceremony live on the Internet, always wanting to be on that stage.

Although we speak different languages, we share the same vision: to change the world with our ideas.

Nothing was better than talking to finalists around the world. Although we speak different languages, we share the same vision: to change the world with our ideas.

My project focused on the development of a new forearm prosthesis control method for transradial amputees, people who have lost their limbs below the elbow. This method allows for continuous, independent control of the joints of a robotic hand made with 3D printing technology. This device can allow people with this disability to recover sensitivity of pressure and temperature and have more fluid movement for all the joints and fingers of a robotic hand. I used concepts of brain-machine interfaces to improve this prosthesis control.
TRAVELING ABROAD FOR SCIENCE: One of the awards I won at the 2016 Intel ISEF was the Philip V. Streich Memorial Award, which guarantees a trip to London for two weeks to participate in the London International Youth Science Forum (LIYSF).
LIYSF is a scientific forum that connects you with important European scientists, offers you a few weeks of life as a student in the renowned Imperial College London, and surrounds you with other young people from around the world interested in STEM.
This was my first time in Europe and I visited Big Ben, London Eye, Stonehenge, and Buckingham Palace. The lectures at the college were spectacular. I heard the work of people involved in the Rosetta Mission and the first Israeli woman to receive the Nobel Prize.
HOW HE BECAME INTERESTED IN STEM: My story with science and engineering research was only possible thanks to science fairs and Intel ISEF, which has kept me inspired and motivated. Through science fairs, I discovered the super power called the scientific method that could guide me in finding or creating things no one in the world had done before.
Having the opportunity to be in environments like science fairs instilled in me a goal to work with people from around the world, where my everyday life as a researcher could be as collaborative and culture-exchanging as Intel ISEF.

Through science fairs, I discovered the super power called the scientific method.

As a kid, I had tremendous luck to have the opportunity to watch dubbed Portuguese versions of European and North American TV shows created to interest kids in science, like Tous Sur Orbite, Evas Funkarprogram, Beakman’s World, and Cosmos (the Carl Sagan version). These shows convinced me to never fail to observe the world around me and always stay curious.

While watching these shows at 7-years-old, I saw advertisements for the Brazilian science and engineering fair (FEBRACE) and opportunities to qualify for Intel ISEF. Since then, my dream was going to Intel ISEF and being with people like me, who love to invent and discover.

ADVICE FOR OTHERS INTERESTED IN STEM: It is very difficult to give valid advice to my colleagues in today’s information age, where they can access most information a click away.

When we pursue big dreams, even failure is worth the risk.

I would tell them what guides me every day: chasing utopias. I believe that when we pursue big dreams, even failure is worth the risk. When we pursue a dream that we find impossible, the results through the journey are always larger than the results from the realization of a dream not as bold.

To quote my favorite Spanish filmmaker Fernando Birri, “Utopia is on the horizon. I move two steps closer; it moves two steps away. I walk another ten steps and the horizon runs ten steps further away. As much as I may walk, I’ll never reach it. So what’s the point of utopia? The point is: to keep walking forward.”