Are you prepared for a zombie apocalypse? If not, you may be in luck. As part of their challenges for the Broadcom MASTERS 2018, the top 30 finalists worked in teams to determine how long it would take different zombie pathogens to infect all of humanity.

All teams faced the same scenario: there is an unknown pathogen mutating people into something else. It was up to them to first identify the type of zombie pathogen they had and then determine its rate of infection. In a simulated biohazard laboratory, the students examined and compared pathogen slides to pinpoint what disease-causing agent they had. They also looked at cells from first-infected organs for clues about how the disease may have been transmitted. Next, for the analytical portion of the challenge, all groups were given information about the rate of proliferation for their pathogens. Using that data, they had to calculate how many days it would take for all 7.5 billion people in the world to transform into zombies.

“Are you ready to save the world?” asked Anna Rhymes, Science News in High Schools Program Manager. Two teams at a time tackled this challenge. In all instances, one group was dealt with a nanobot and first-infected lung cells while the other was given a fungus and first-infected liver cells.

Photo courtesy of Linda Doane/Society for Science & the Public 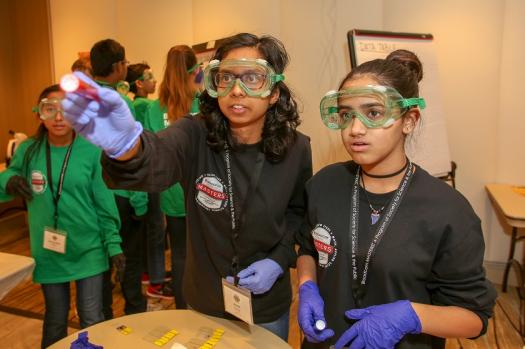 Photo courtesy of Linda Doane/Society for Science & the Public.

As the finalists worked in the biohazard lab, those who had prior experience helped their teammates navigate the equipment. “I’ve never done this before, can you set the microscope?” asked one purple team member to another. Similarly, the green team also had students ready to assist their group with selecting the proper zoom setting. When working with the cell samples, a member of the gold warned his group to “be really careful with the cover slips because they shatter very easily,” as he recounted how he once broke four of them consecutively for one of his experiments at school. 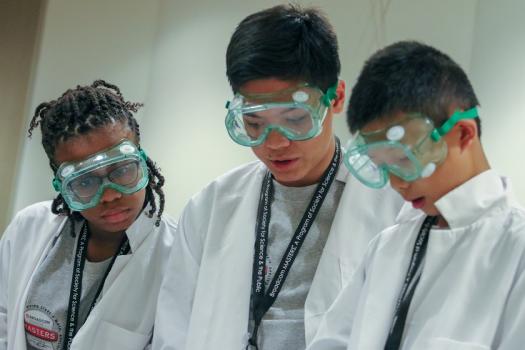 Photo courtesy of Linda Doane/Society for Science & the Public.

The teams had the most difficulty with the second portion of the challenge. Despite running out of the time in the first part, the black team learned from their mistakes and knew to ask clarifying questions right away. Members of the white team also embraced the “divide and conquer” mentality— “while you work on this graph, I can start the other.” The silver team noted how important it was for them to work together so that they could finish their calculations. 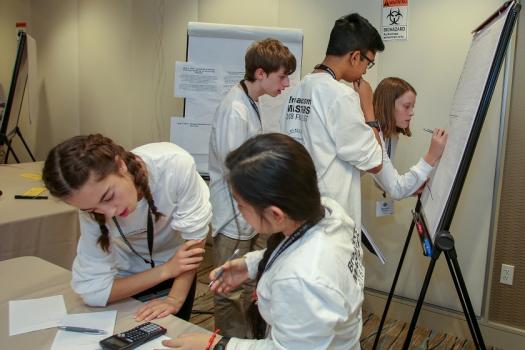 Photo courtesy of Linda Doane/Society for Science & the Public

In the end, the teams concluded that it would take about 28 days for the fungus and 300 days for the nanobot to turn everyone into zombies. Since the liver was the first-infected organ for the fungus pathogen, it was theorized that it may have been transmitted via consumption. To slow its spread, the students recommended staying away from foods and cats that contain yeast, such as baked goods, cereal products and alcohol. They also suggested testing a variety of antibiotics. Given that the lungs were the first-infected organs for the nanobot, all the groups were confident it was an airborne pathogen. To combat it, the finalists advised people to wear masks in the short-term, but wanted to look into engineering air filters for the long-term.

With these survival tactics from the top 30 finalists, we may have a fighting chance against zombies after all.