Dennis Drewnik, a college freshman, got to attend the week-long Nobel Prize festivities in Stockholm, Sweden through the Stockholm International Youth Science Seminar (SIYSS), along with 25 other bright young scientists.

The first-year University of Manitoba, Canada student won the trip as one of the top prizes at the 2016 Intel International Science and Engineering Fair (ISEF), where he competed with 1,700 participants for one of three spots awarded at the prestigious science fair. His research on how to protect canola crops against devastating fungal pathogens by identifying and characterizing novel resistance genes led him to Stockholm and the SIYSS.

In Sweden, Dennis went sightseeing, learned about fika, and presented his research to students, teachers, and esteemed Nobel Laureates.

Read on to learn more about Dennis’ experiences in Sweden. 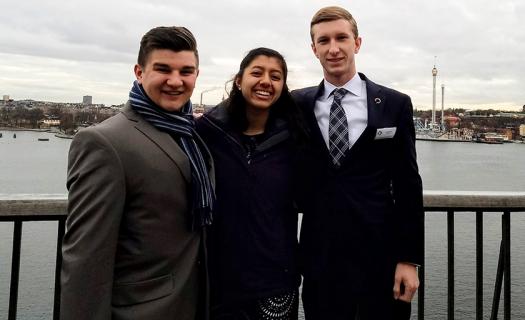 As I was getting onto the plane I was excited, because not only was I the only youth Canadian scientist going to the Nobel Prize Ceremonies, but this also was the longest plane ride I’ve ever had.

I was told that the participants would be staying on a boat, but I never imaged a vessel so beautiful. The ship Af Chapman was definitely the biggest boat I’ve ever been on.

Once everyone arrived we explored the area. We went inside the mall to enjoy a fika, which is a custom Swedish gathering that includes good conversations accompanied by a hot drink and some sweet pastries — I had green tea with the best gingerbread cookies I’ve ever tasted.

Fika is a custom Swedish gathering that includes good conversations accompanied by a hot drink and sweet pastries. 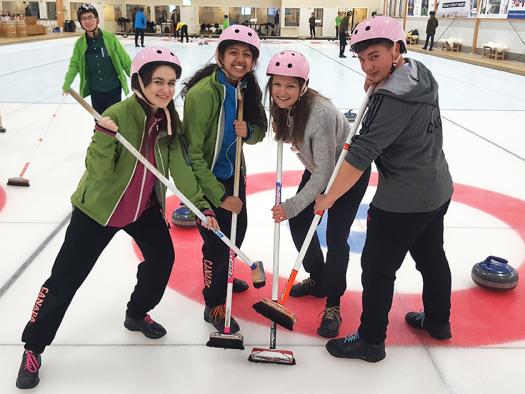 The next day we went curling. Although I am Canadian, I have never curled before, and it was way harder than I could have ever imagined. There were way too many people falling, slipping, and overshooting the stone. However, at the end of the day I can honestly say that everyone there became two-fold better than they were in the morning. I don’t know about Olympic standards, but I think we all got pretty close.

Later that night we had our international dinner, which was where all of us gave presentations about our countries. This was definitely a very interesting dinner! The participants came from many countries, including, Germany, England, Mexico, Japan, Singapore, South Africa, Russia, and Denmark, just to mention a few. The Japanese participants even brought some traditional foods so I was able to enjoy some seaweed and canned grasshopper!

On Tuesday we visited the pharmaceutical company AstraZeneca to learn about pill manufacturing. We suited up in blue suits and hairnets to keep the facility clean. The factory material transportation machines were automated and moved across the factory. Those machines were the most interesting in my opinion, because no matter how hard you tried to get run over, the machines would always stop. Such great engineering!

No matter how hard you tried to get run over, the machines [at AstraZeneca] would always stop. Such great engineering!

After the tour we went on a cultural visit to the Royal Castle in the Old Town. The castle contained items from the royal family all throughout history. Then we had a traditional Swedish Christmas dinner and it was absolutely delicious. Our coordinators dressed up in costumes and sang traditional Swedish Christmas songs. I didn’t understand any of it but they were beautiful and sounded like angels. 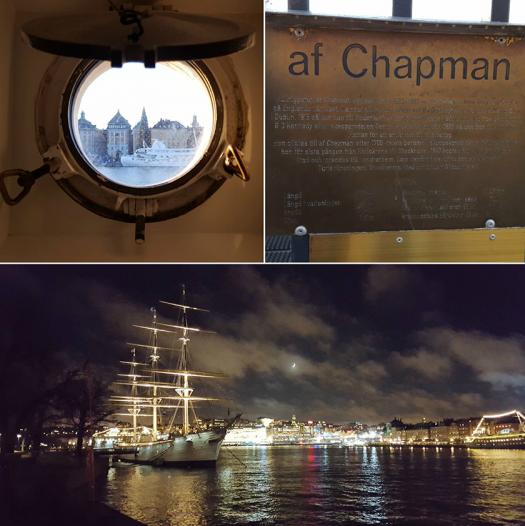 The boat, af Chapman, where Dennis stayed with the other participants in Stockholm.
Photo courtesy of Dennis Drewnik.

On Wednesday we explored Stockholm! Sightseeing is one of the most interesting and fun activities. I love to explore and travel! After seeing Stockholm, we went to the Karolinska Institute to attend the Nobel lecture in medicine and physiology. This was such an interesting lecture; I was able to learn so much about the laureate’s discovery in autophagy (the cell’s recycling system). After the lectures, we mingled with professionals at the reception.

On Thursday we attended other Nobel lectures in physics, chemistry, and economics. The chemistry lectures were absolutely mind-blowing and eye-opening. This was without a doubt some of the most interesting research I’ve ever seen. They designed and assembled functional molecular machines using the mechanical bond.

Later, we went to a shutdown nuclear test facility 30 meters in the ground to learn the proper etiquette for the Nobel banquet. We also learned how to waltz and boogie with our designated partners in preparation for the Nobel ball.

Friday was the big presentation day. We got to the Karolinska Institute in the early morning and I was very nervous for the on-stage presentations. I was able to freely present my research and inspire youth and visitors who came to my project. This helped me get a little less nervous for the on-stage presentation. It was an absolute treat to have a full audience who was interested in the research I’ve been working on for so long. It feels good to know that my work reaches out and interests others in the scientific field!

It was an absolute treat to have a full audience who was interested in the research I’ve ben working on for so long.

I was also able to go around and see the work of my fellow participants! There was so much brilliant research being displayed at this event that I was honored to attend and be a part of it. Truly phenomenal research, design, and discoveries were performed by the world’s leading youth scientists!

Saturday was probably the best day of my life, without a doubt. Everyone got into their dress clothes. The men suited up into our rented tailcoats for the Nobel events, and it was definitely the fanciest thing I have ever worn. In the morning, the first snowfall of Stockholm for the year covered the ground like a light blanket. It looked like a fairytale, everyone dressed so nicely, getting ready for the night to come

The chemistry lectures were absolutely mind-blowing and eye-opening.

When we exited the limo taking us to the Nobel Ceremonies it felt like a red carpet event. People were taking pictures of all of us like we were famous celebrities. All I saw were camera flashes before we entered the building where the ceremonies were held. The ceremonies were extremely prestigious. The king of Sweden and the rest of the royal family presented the awards to the Nobel Laureates along with the deciding committee.

The best part of the night was the Nobel Night Cap, the largest after party that is impossible to forget. The Night Cap lasted until 6 a.m.!

Saying goodbye to these wonderful people, participants and coordinators alike, was probably the most difficult part of this whole trip. One participant told me “in life, you always see one another more than once,” and I’m happy to hear that, because I can’t wait to see every single member of this close-knit group again.

This was the trip of a lifetime.