When college freshman Jeremiah Pate met Kip Thorne, a Nobel Prize-winning scientist known for his work on gravitational waves, they discussed their research like peers. Jeremiah had the opportunity to attend the Nobel Prize festivities and the Stockholm International Youth Science Seminar (SIYSS), an annual weeklong event for young international scientists, in Stockholm, Sweden. He and two other Intel International Science and Engineering Fair finalists were awarded the trip during Intel ISEF 2017, through the Dudley R. Herschbach Stockholm International Youth Science Seminar Award.

Jeremiah was named Arizona’s Future Innovator of the Year in 2015 and has been researching a cure for Parkinson’s disease.

Check out what he had to say about his experience in Europe. 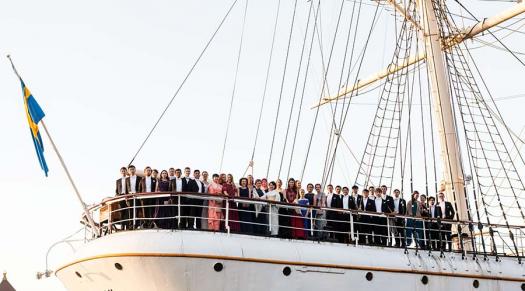 Jeremiah and the other SIYSS students dressed up for the Nobel Prize festivities.
Photo courtesy of Karina Movsesian.

THE BEST PART OF THE TRIP: One of the coolest moments was the time I got to speak to Kip Thorne, who received the Nobel Prize in Physics and is a Science Talent Search 1958 alum. It was cool to see how he’d gone from doing research at STS to winning a Nobel Prize. But the most amazing part wasn’t just talking to the Nobel Laureates but to all the young scientists from around the world. I didn’t realize we’d become that close-knit of a group. I’m still in touch with many of them.

Going to a Nobel Prize ceremony and SIYSS is a once-in-a-lifetime experience.

The SIYSS experience was immersive and extensive. We did everything from learning how to curl to tours of the Royal Castle. It was really cool to spend that week in Sweden. At first I was sad I didn’t win the top prize at Intel ISEF, but in the end, going to a Nobel Prize ceremony and SIYSS is a once-in-a-lifetime experience that money can’t buy.

HIS FAVORITE PART OF INTEL ISEF 2017: I went four times, and each time was a little bit different. My first time going to Intel ISEF, it was really astounding to meet other finalists from around the world. On the first night there’s the pin exchange, and talking to people from many countries about their research was quite awesome. My favorite Intel ISEF activity was the Alumni Entrepreneur Panel, which showed where ISEF alumni had gone on from their research. I’m interested in taking that entrepreneurial route, and seeing how they took their research and made it into companies was really quite cool.

Seeing how they took their research and made it into companies was really quite cool.

HIS CURRENT INTEL ISEF PROJECT: What I aimed to do was to find a treatment for Parkinson’s disease, by finding the underlying causes of the disease. I was inspired because one of my family friends was diagnosed, although I initially had no experience in biotechnology.  One of the causes of Parkinson’s is the alpha-synuclein protein, which is supposed to be a certain shape and has a very important role in the brain. In Parkinsonian brains, the alpha-synuclein protein folds incorrectly and aggregates, overwhelming chaperone proteins that normally aid their folding. So I wanted to build a better chaperone protein, which sounds like an easy task but is actually quite complicated.

Optimized chaperones can cure the symptoms of Parkinson’s, at least in fruit flies.

I used a publicly available protein database to build a template for a chaperone protein. I wanted to test the protein in the lab. So I created a Parkinson’s model in fruit flies, and tested the protein at Dr. Daniela Zarnescu’s lab at the University of Arizona. The protein can effectively clear alpha-synucleins in the simulation. Optimized chaperones can cure the symptoms of Parkinson’s, at least in fruit flies.

This project (titled “Ameliorating Alpha-Synuclein Aggregation in Parkinson’s Using Optimized Chaperones: An in silico Approach”) represented going from a vague idea to testing in vivo. That is a microcosm of the pharmaceutical process, which was a massive learning experience for me.

HIS CURRENT STEM GOALS: My most immediate goal is to continue my Intel ISEF project. I have an upcoming experiment testing the protein on human cell culture. We already know it can cure Parkinson’s in fruit flies, so this may be a major step forward to having a Parkinson’s cure for people.

I’m also working on a startup called Lunasonde using satellites to monitor the responsible allegation of natural resources. I finally got seed money to build spacecraft and I’m looking forward to a launch later this year.

THE IMPORTANCE OF SCIENCE FAIRS:  Intel ISEF has really been an amazing influence on my life. After participating, I’ve gone to several high schools and given talks about my research. And I’ll be giving more talks about going to the Nobel Prize ceremonies. It’s cool to meet people who could be competing at Intel ISEF or competing in a few years down the road.

Science fairs are about connecting young scientists and scientists to mentors.

At the end of the day, it’s not about winning prizes or scholarships, but about connecting young scientists and scientists to mentors. That’s especially important. Before I was involved in science fairs, I was interested in science and research but didn’t know anyone else who shared that same interest. After competing at my local fair and international fair, I found the embodiment of the science community.

ADVICE FOR OTHERS INTERESTED IN STEM: Innovation is a conversation. Science is never conducted in a vacuum. It’s really about talking to people who have different ideas and have conducted different kinds of research. It’s also about seeking out mentors, and looking into multiple fields to get ideas.