Led by Kate McGregor, Manager of Family and Community Programs from the Computer History Museum in Mountain View, California, the first challenge for the Broadcom MASTERS 2018 took place Sunday morning. “Today we’re going to try to solve some problems and challenge ourselves in new ways,” began Kate. As the 30 finalists oohed and ahhed while they unwrapped their Raspberry Pi computers, Kate explained what the challenge would entail.

The challenge was split into two portions. For the first half, the finalists had to set up their own Raspberry Pis and tackle a mini-challenge individually. They were free to discuss within their teams and help each other troubleshoot.

White team members working on their jeopardy game: “Is the white team awesome?”
Photo courtesy of Linda Doane/Society for Science & the Public. 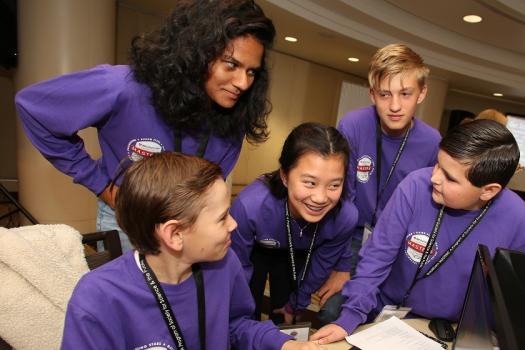 The purple team designed a program to assist with leveling.
Photo courtesy of Linda Doane/Society for Science & the Public.

“Stay focused, help each other and ask questions,” advised Kate. They had 20 minutes to get their programs working and share with their teammates what they learned. “Oh, I love this stuff! This is so cool!” exclaimed a member of the gold team. Once they plugged in the computers to a power source and they turned on, they noticed that a LED matrix on top of the Pi lit up. This was the first time in Broadcom MASTERS history that a Sense HAT, a peripheral, add-on board, was used in the Raspberry Pi challenge.

For the second part, each team was instructed to design, code and build a computer program that would control the gyroscope (another feature of the Sense HAT, in addition to the LED matrix) connected to a Raspberry Pi computer. “I’m going to give you a challenge, but that is just a starting point. Think outside the box!” encouraged Kate. The goal was to adjust the roll (front to back) and pitch (side to side) axes to trigger code that would display an image on the LED matrix when successful or the letter “X” if gyroscope readings were outside the desired range. 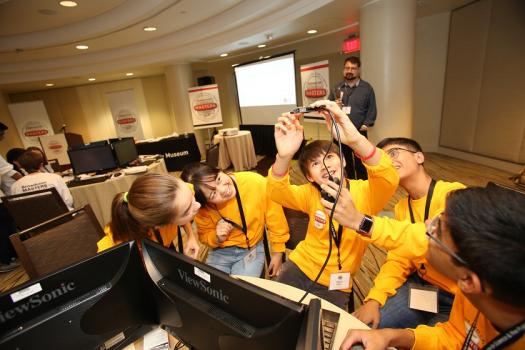 The gold team programmed their LED matrix to display yellow at the center when all three axes were at zero or 360 degrees (device lays flat).
Photo courtesy of Linda Doane/Society for Science & the Public.

Although all the teams received the same challenge, different project concepts were pursued. The white and green teams came up with games, one modeled off of Jeopardy and another based on Hot and Cold, while the gold and purple teams programmed their LED matrices to reflect if their devices were resting on flat surfaces. Members of the black team set a specific set of measurements that would trigger a smiley face to appear on their Raspberry Pi. Last, but not least, the silver team coded two different ranges that corresponded to two different pictures. One range would yield a Pac-Man ghost and the other would yield Mario. 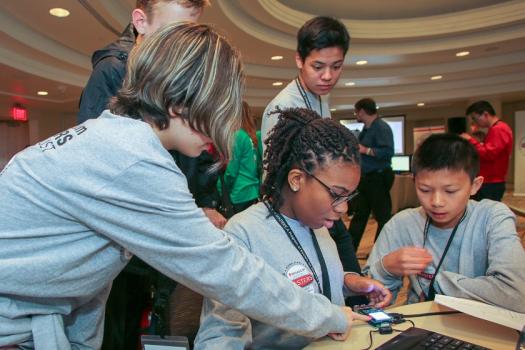 The silver team coded different ranges that corresponded to two pictures.
Photo courtesy of Society for Science & the Public.

In their presentations, the teams also discussed challenges they faced and extrapolated some real-word uses. All finalists ran into coding errors, but noted that once they understood the syntax rules involved, their projects went smoothly. Others had some technical difficulties with the gyroscope being misaligned at times, but learned from trial and error as they progressed. Some concrete applications they came up with include medical sensors, GPS devices, animation and construction assistance. 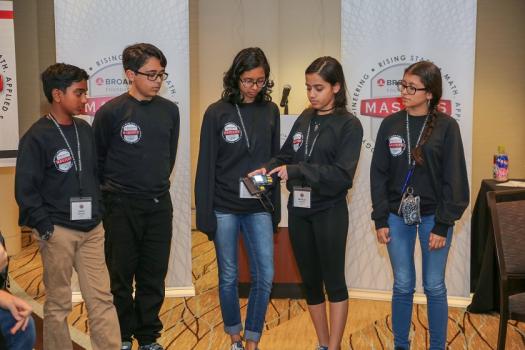 The black team set a specific range of measurements that would trigger a smiley face to appear on their Raspberry Pi.
Photo courtesy of Linda Doane/Society for Science & the Public.

At the end, Kate remarked how impressed she was with all the finalists and how well they worked in teams. “You all kept persevering and I am so inspired by your accomplishments!” For the finalists, the first challenge of the Broadcom MASTERS proved to be a lot of fun and it came with the added bonus of taking home their Raspberry Pi computers and the Sense HATs!