“Realize that the work you’re doing is much more important than what you perceive it to be,” urged Ann Makosinski (Intel ISEF 2013) to a roomful of Intel ISEF 2017 finalists at the Intel ISEF Innovation and Entrepreneurship Panel.

The projects and research finalists are working on are not only important to their lives, but to others, said Ann, the founder of Makotronics Enterprises. 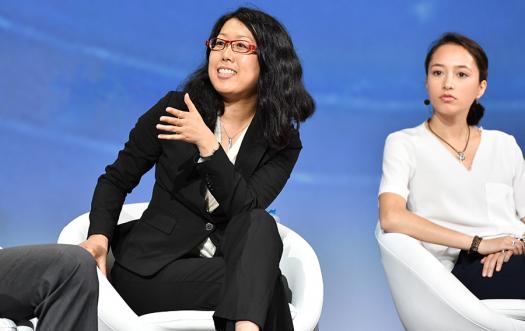 Meredith Lee (left) tries to build play into her downtime, such as attending maker-faires.
PHOTO COURTESY OF SOCIETY FOR SCIENCE & THE PUBLIC/CHRIS AYERS PHOTOGRAPHY.

Intel ISEF is life-changing, several of the alumni on the panel agreed. “The path that I was on, and the path that I’m on after Intel ISEF, are drastically different. It all starts with science fair,” said Kai Kloepfer (Intel ISEF 2013), who is working on creating smarter firearms through biometrics with Biofire Technologies.

“I’m not being too boastful when I say ISEF and the Society for Science & the Public have some of the most extraordinary, creative, and successful alumni,” said Maya Ajmera, President & CEO of the Society. “They’re disrupting industries and solving some of the world’s most intractable problems.”

Now more than ever the world needs great thinkers like the Intel ISEF 2017 finalists, Maya said.

The work you’re doing is much more important than what you perceive it to be.

Taylor Wilson (second from right) was the youngest person to produce nuclear fusion, using a fusor.
PHOTO COURTESY OF SOCIETY FOR SCIENCE & THE PUBLIC/CHRIS AYERS PHOTOGRAPHY.

“Always do something that you can leave the world a little bit better than when you found it,” said Taylor Wilson (2009-2012), a physicist and Thiel Fellow. He encouraged the finalists to think of the broader implications of their work. “You can’t do science without communicating it and thinking about its ramifications,” said Taylor, who at 14 was the youngest person to produce nuclear fusion.

“It’s boring if you’re not trying to change the world,” agreed Geoffrey Woo (Intel ISEF 2005-2006), the co-founder of Nootrobox.

For Geoffrey, the skills he gained through science fairs have helped him greatly in entrepreneurship. “There’s an important storytelling aspect” to both, he explained, in “convincing judges or other stakeholders that what you’re doing is important.”

Taylor agreed. Science fairs enable communication skills. “Being able to communicate is what makes the research impactful,” he said. “There’s no better venue to develop those skills than Intel ISEF.” 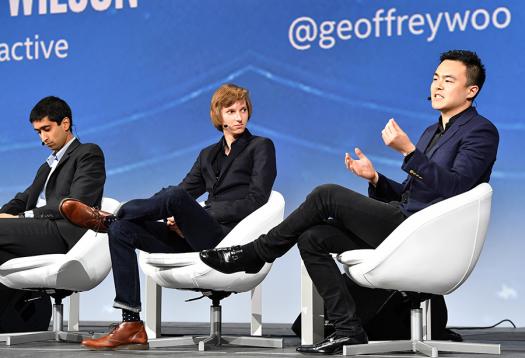 Geoffrey Woo (right) drives into failure because it helps him learn.
PHOTO COURTESY OF SOCIETY FOR SCIENCE & THE PUBLIC/CHRIS AYERS PHOTOGRAPHY.

Geoffrey tries to drive into failure because they help you face reality and learn. Meredith Lee agreed, explaining, “If you’re not failing, you might not be trying to stretch yourself outside of your comfort zone enough to make breakthroughs,” said Meredith (Intel ISEF 2000), the Executive Director of West Big Data Innovation Hub.

Some of Sheel’s companies have failed, and he thinks “failure should be celebrated,” he said. “If you don’t fail, it means you’re not actually trying to do something big enough.”

Taylor echoed that sentiment, explaining that you’ll never end up where you think. And sometimes when you fail, that’s when the biggest innovations happen. 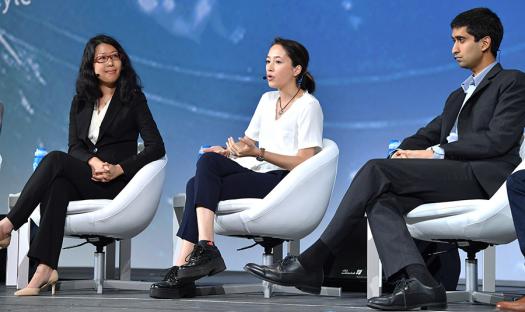 Ann Makosinski (middle) invented a flashlight powered by the touch of your hand.
PHOTO COURTESY OF SOCIETY FOR SCIENCE & THE PUBLIC/CHRIS AYERS PHOTOGRAPHY.

Ann encouraged the finalists to release their inventions or research, even if they think it might not be ready. It’s possible to wait too long, to be a perfectionist. She created flashlights and phone chargers that take excess heat and turn them into energy.

Balance is also an important aspect of STEM. Prioritize your goals, long-term and short-term, and your happiness, Kai urged. Balance will help you be successful, he said. 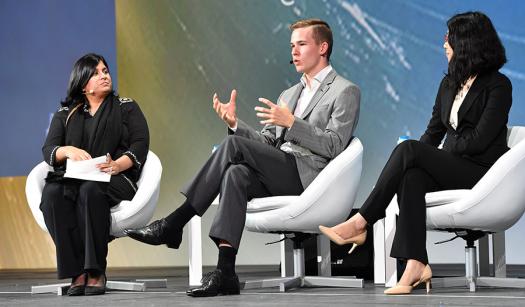 Kai Kloepfer (middle) is building the future of firearms through a tech-driven approach.
PHOTO COURTESY OF SOCIETY FOR SCIENCE & THE PUBLIC/CHRIS AYERS PHOTOGRAPHY.

“You can become totally engrossed and exclude everything else in life,” he said. During his Intel ISEF project, he stopped working out, talking to his friends, and going to class. “You can be efficient and successful in spikes by ignoring other things. But if you sacrifice everything else in your life, then you’ll fall further back down.”

When scientists are in the midst of working on their projects or research, they can also be very lonely. “You’re not socializing, you’re busy doing the work — it’s important to bond and talk to other people in STEM,” Ann said.

Failure should be celebrated. If you don’t fail, it means you’re not actually trying to do something big enough.

Geoffrey suggested maintaining your playfulness “like when we were five and played with Legos.” This can help sustain them through hard, and good, times. Similarly, Meredith tries to make time for maker-faires and other fun events on the weekends.