This year, during the annual Broadcom MASTERS competition, finalists headed to the Smithsonian Environmental Research Center (SERC) in Edgewater, MD, to participate in a multitude of challenges. On their trip, the MASTERS were taught the intricacies of animal migration as well as the importance of wildlife tracking.

The main theme of the day was learning about sharks and how to track them using devices. Most commonly, tracking devices that are used in the field work by pinging a shark’s location to a given buoy where the information is later collected manually by researchers. The data is then used by researchers to learn migration patterns and locate birthing grounds.

Over the course of the day, the finalists were tasked with making a specific tag called a Pop-up Archival Tag (PAT) which is designed to record water temperatures and depths sharks travel to, store the information, and then detach from the shark where it floats to the surface and the data is collected.

There were four main challenges the finalists participated in, through which they learned about shark migration patterns, how to perform a tracker placement surgery, how to make a tracker prototype, and finally they presented the culmination of their research to actual SERC scientists.

During the first event of the day, the students participated in a mock research trial. Based on an allotted budget, the students had to decide what equipment to buy, the optimal port for tagging the highest number of sharks and any other necessary allocations for successful completion of the assignment. After they conducted their research, finalists presented their findings. The exercise was meant to illustrate working with other scientists on a limited budget and tight deadline.

“We’re proposing that we place our tagging stations in Florida because sharks are clustered there during mating season and when they migrate south for the colder season, we can tag as many as possible,” explained Ahmad Ismail, a finalist from Santa Clara, California. 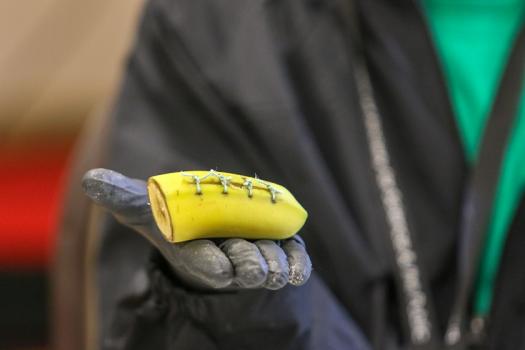 After students discussed and finalized their plans, they moved on to the practical event of the day, which was learning how to install tracker tags into wildlife, as well as build prototype tracking devices of their own. In teams, finalists sliced into unpeeled bananas, inserted trackers and sutured them back up, an alternative medium to working on real sharks, for the purpose of skill building and practicing surgery.

Afterwards, the finalists collaborated to build prototype trackers. A requirement of this part of the challenge was that the tracker should detach from the animal, and have the ability to float back to the surface without jeopardizing the expensive and sensitive computer chip within the casing. These experiments were great tests of teamwork, keeping calm under pressure, and out-of-the-box thinking.

“Working as a team was beneficial because you’re more effective together. There can be differences in opinion and differences in ideas,” said Jack Albright, finalist and winner of the $20,000 Robert Wood Johnson Foundation Award for Health Advancement, “but for the most part, you bring in different perspectives and different ways of approaching solutions.”

After the finalists constructed their shark tracking tags and wrote some notes on what they had accomplished, they headed to the Mathias Lab where they were able to present their findings and their inventions to a number of SERC scientists, including Anson Hines, the director of SERC and principal investigator of the Fish and Invertebrate Ecology Laboratory.

The students learned a lot during their trip to SERC, but one of the key takeaways was the importance of looking at the same problem from different views. Hopefully, like sharks that never stop swimming, these bright students never stop moving forward in their scientific journeys.