Hamsa Padmanabhan‘s (Intel ISEF 2006) work takes her all over the world. She’s an international physicist, from Pune, India, working as a Tomalla Fellow at the Institute for Particle Physics and Astrophysics at ETH Zurich in Switzerland. She graduated from The Inter-University Centre for Astronomy and Astrophysics (IUCAA) with a Ph.D. in physics in 2015.

Science is in Hamsa’s blood. Her father, Thanu Padmanabhan, an internationally acclaimed astrophysicist, encouraged her to study STEM fields and pursue learning outside of the classroom. Heeding her father’s advice and inspired by his work, she eventually earned her doctorate in physics from the Pune-based Inter-University Centre for Astronomy and Astrophysics (IUCAA) in 2015.

“I was introduced to the beauty in equations, symbols, and geometrical concepts,” Hamsa said. 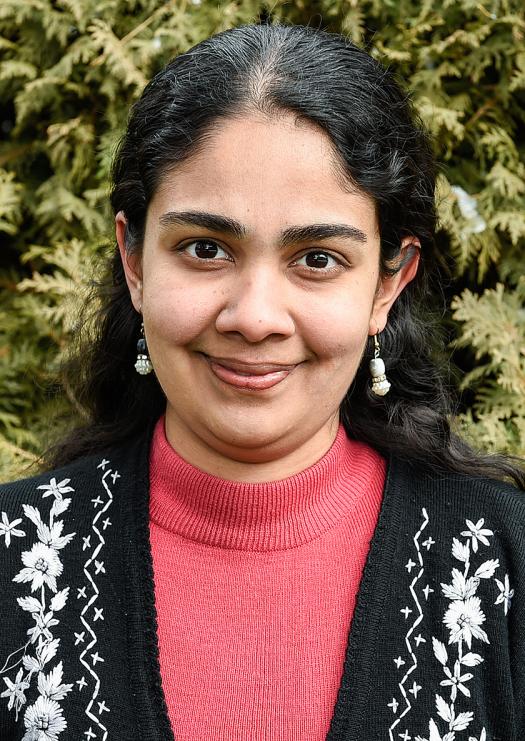 These days, Hamsa can be found in the lab, keeping busy as a post-doctoral research fellow. She’s not only collaborating on several research projects such as the CO Mapping Array Pathfinder (COMAP), an experiment led out of Caltech, and the Dark Energy Spectroscopic Instrument (DESI) survey, but she also shares her knowledge and love of astrophysics and cosmology at conferences spanning the globe.

Her current research focuses on unraveling the history of the universe. More specifically, she studies the physical processes involved during the universe’s reionization epoch. Studying reionization helps scientists understand the process by which structures formed in the universe, from smooth matter distribution in earlier periods to the highly structured galaxies that exist today.

Hamsa explained that in the universe’s beginnings, there wasn’t much dark energy but that dark matter was more abundant. Then, for several hundred million years following the period of recombination, the universe was “dark,” apart from the slowly fading glow of Cosmic Microwave Background.

Hamsa’s efforts in science have been recognized with the KVPY Science Fellowship, an award given annually to 100 pre-Ph.D. students in India. She received a scholarship, research grant, and opportunities to network with established physicists in research institutes. During her Ph.D. studies, Hamsa was also recognized with the Shyama Prasad Mukherjee Fellowship, which is given annually to the top four physics doctoral students in India.