Logan Pallin, an Intel ISEF 2008, 2009, and 2010 finalist, is a marine conservation biologist. At the end of December, Logan headed out for a four-month scientific research trip to Antarctica to study the effect of climate change on humpback whales.

His research in Antarctica is included in the Palmer Long Term Ecological Research program, a National Science Foundation funded project. Logan and the rest of the team will remain at Palmer Station through April. He is currently a graduate student at Oregon State University, pursuing a master’s degree in fisheries and wildlife.

Logan and his colleagues, including graduate student Erin Pickett and advisors from Oregon State University and Duke University, have been blogging about their research and scientific work with humpback whales. 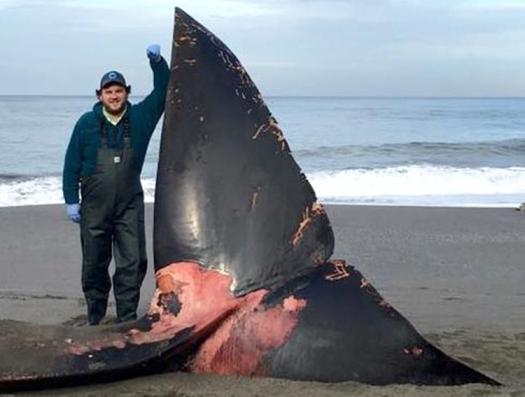 Logan stands next to a dead blue whale while performing necropsy in Oregon. Work done under NMFS/MMPA and Oregon State University Permits.

You’re heading to Antarctica to study the effect of global climate change on humpback whales for four months. What are you most excited about? What do you hope to learn about the whales?

I think I am most excited to be in one of the few remaining pristine wilderness areas on the planet and to just be doing amazing field work. By the mid-1970s, more than 200,000 humpback whales were removed from the southern ocean by commercial whaling vessels. In the grander scheme of things, more than 2 million great baleen whales were removed in total. When we’re in the field, we use a crossbow to collect a small piece of skin and underlying blubber from the animal. From those tissue samples, we do all our genetic and tissue analysis. We can figure out their gender, age, pregnancy status, and diet, among other things. That’s where all of my work lies — trying to figure out what we can learn from these tissue samples and how these certain population demographics could change over the next 100 years with climate change. These populations are recovering more rapidly than we had expected. We’re really trying to understand how this recovery could change as the Antarctic continent continues to change. We are currently trying to set the baseline for a long-term study.

Can you describe the preparation for the trip? Have you ever been on a ship for that long?

As far as preparation, I guess you could say I have been prepping for the last four years when I started working on this project with my advisors at Duke. But more recently, and as of January 2015, I have been prepping by having extensive medical testing done, as well as getting into the field as much as I could this summer to practice collecting samples and working around these huge, magnificent animals.

The ship that will take us to Palmer Station is the NSF Research Vessel Laurence M. Gould. I will be on the ship for five to seven days until the ship picks me up mid-April to return to Chile. I have spent a lot of time on boats and other research vessels, like the Research Vessel Cape Hatteras, which was a NOAA vessel stationed at the Duke University Marine Laboratory in Beaufort, North Carolina. I was on that ship for six days, cruising the Atlantic looking for pilot whales and other pelagic cetaceans.

How did you first become interested in science and studying whales?

I first became interested in science in 7th grade. We were all required to do a science project, and as a student I think it is common that we never really like being forced to do a project for a grade, but I immediately became hooked. I did a simple project trying to figure out which gender of monarch larvae produced a stronger silk. After presenting at the Northeastern Minnesota Regional Science Fair I was hooked. It was so awesome to know that at the moment of presenting my work, I was the expert and now had the opportunity to teach others about it.

At Duke, I was in the Pratt engineering school pursuing a degree in Environmental and Civil Engineering, hoping to go into environmental law. Things were just not clicking. I missed working in the field, especially after all the field work I did through high school that took me to Intel ISEF three times. I switched out of engineering and decided to pursue music, as it was always a passion of mine, and something I escaped to when things became too stressful. But as I was no virtuoso, I decided to venture to Duke’s marine laboratory and that is where I connected with Drs. Andrew Read, Doug Nowacek, David Johnston, and Ari Friedlaender who worked on cetaceans. Things just clicked from there on out.

I graduated from Duke in 2014, with distinction, with a B.S. in Environmental Science and a Certificate in Marine Science and Conservation Leadership. I’m now a graduate research assistant at Oregon State University in the Fisheries and Wildlife program, working under the advisement of Dr. Ari Friedlaender who is in the Marine Mammal Institute at OSU’s Hatfield Marine Science Center. 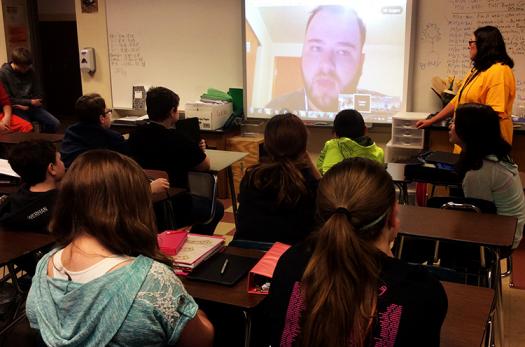 Logan often talks to classes on Google Hangout to explain his scientific research and expand their idea of scientists.

Why do you speak to students about your science adventures?

Broadly put, the ultimate goal of my graduate career is to become a research professor, investigating cetacean ecology. But more importantly, my goal is to inspire the next generation of young scientists, encouraging them to develop their identity as scientists. It is my personal opinion that our nation lacks in the STEM fields, and with the current onset of environmental change, we are in dire need of new and young minds to help us solve our problems.

I grew up in a small town, and in my graduating class of about 160, I believe only five to 10 of us left the state for college. I want these students to know that there are great opportunities outside the walls of our city and that it does not take a brainiac to be a good scientist. If I have learned anything through my undergraduate career, it was that I was no way the smartest of the bunch, but what I had over everyone else was a huge passion for my work, which meant I will never really work a day in my life. 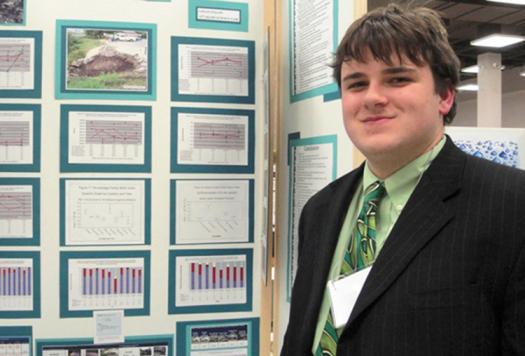 What was your most memorable experience at Intel ISEF? Can you describe your research project(s)?

I think my most memorable moment of Intel ISEF was the first time I got called on stage for an award. I received an award through the macroinvertebrate society. I worked on my project for four years and built/engineered a rain garden to act as a natural filtration system that would filter out storm water runoff from a road system, and divert the clean healthy water back into a trout stream. I monitored the effects of this rain garden on stream quality by analyzing water quality parameters like oxygen and turbidity, and collected and analyzed over 5,000 macroinvertebrates to assess their family biotic index levels, which were another indicator of stream quality.

Did your involvement in Intel ISEF influence you to pursue opportunities in STEM or promote STEM to others?

Of course — I was able to get both of my younger sisters to participate and attend Intel ISEF as participants. I’m also currently mentoring two middle and high school students who are working on projects of their own, and I’m encouraging them to really aim high and try to attend Intel ISEF, even if it is just as an alternate. I found that collaborating was one of the most beneficial things, that and being immersed in a room with cultures from all over the world.

Science fairs immerse students in science, specifically something that they have had to watch grow from nothing, in a very non-confrontational way. It allows them to experience science from all different ages and let them see that there are a ton of other students doing the same thing. I still have friends who I talk to that I met through my science fair travels. They have not only become friends, but colleagues.

What is your advice to young people interested in science and math?

Don’t ever let anyone tell you that you are not smart enough! I feel too often students don’t get the opportunities they deserve, but if they excel in the STEM fields they will have a plethora of opportunities that open for them in the future. 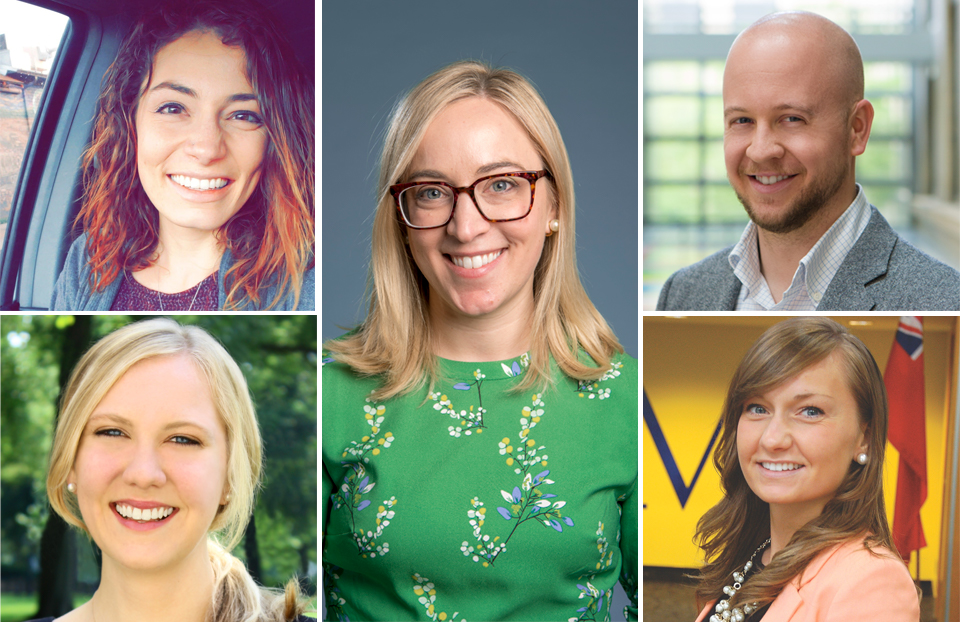 A future forward mindset for innovation and entrepreneurship