This post is part of a series profiling the top award winners of the Intel International Science and Engineering Fair (ISEF) 2019. Intel ISEF is the largest pre-college, international STEM competition in the world. This year’s competition included participants from 80 countries, regions and territories. Every year, the brightest young scientists from all over the world come together to participate in this incredible fair.

In this year’s competition, Poojan Pandya of Dix Hills, New York, was one of the winners in the category of microbiology. Poojan and his partner, Leo Takemaru from East Setauket, New York, investigated the role of the protein CCDC11 in the budding of HIV (the process by which the virus leaves a cell and spreads infection). They found that cells lacking CCDC11 showed significantly less budding than normal cells, indicating that CCDC11 is involved in the process. With the results of Poojan and Leo’s experiment, researchers may have a new potential target when creating antiviral medication to combat HIV.

Here is our conversation with Poojan.

I’ve never before been in a room brimming with as much talent and passion for science! It was inspiring to be in the company of so many brilliant young scientists. ISEF was an amazing culmination of the countless hours my partner and I spent working on our research. 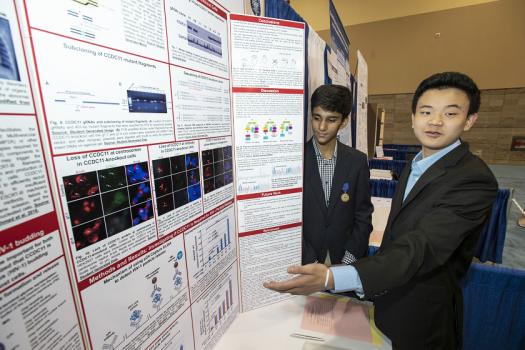 I’ve learned that science requires a great deal of creativity. Science is often perceived as constant and as a discipline that requires only rote memorization. This couldn’t be further from the truth! The definition of research as the creation of new knowledge inherently implies that science constantly changes. In order to be successful in scientific research, you need to be original. Research can be valuable even if it is unsuccessful in its intended goal as long as it differs in some way from what has been done in the past.

I always try to face failure by working even harder. Rather than letting it discourage me, I think it’s more productive to use the initial setback as further motivation to succeed.

What is the last book you read?

Gifted Hands, an autobiography by Dr. Ben Carson. It’s an inspiring story of Carson’s journey from a childhood laced with hardship to his position as one of the top neurosurgeons in the world. Carson’s story truly illustrates that anything is possible, even in the most improbable of circumstances.

What issues do you feel all countries should unite to take on?

I strongly believe that education should be promoted and supported for children coming from all walks of life around the globe because education is empowering. It is what allows people to progress towards better lives and, on a larger scale, it is what will enable humans to deal with the important issues we face today.