In this year’s competition, one of the top winners in the category of computational biology and bioinformatics, Jason Ping of Fort Lee, New Jersey, built and trained a machine learning tool to read and interpret biomedical literature on genetic variations in order to predict the effects of genetic mutations. As it stands, this process is performed manually by researchers combing through hundreds of volumes of text and can be very time consuming as well as susceptible to bias.

Ultimately, Jason’s study significantly streamlines the research process and will potentially lead to the expedited development of new therapies.

Here is our conversation with Jason.

It was absolutely mind-boggling to be around such motivated and driven people from around the world, all brought here by a shared love for science. While going to ISEF gave me a sense of validation, it was simultaneously one of the most humbling experiences of my life to be surrounded by such brilliant minds with knowledge of concepts I could barely understand. While we were technically “competing” against one another, everyone I met was incredibly friendly and open. I’ll never forget how, on the first day, the other students and I all helped each other set up our posters for the opening ceremony. I still keep in touch with those I met during the competition. 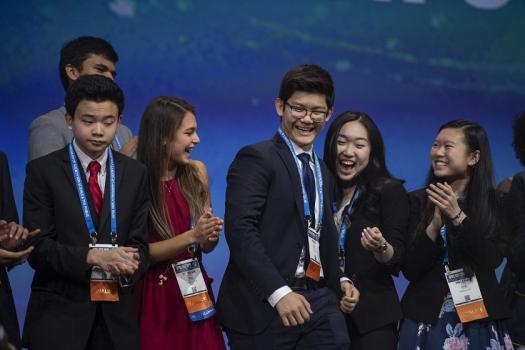 The work you do is only important if you can explain it to others. When I first began explaining my project to family and friends, I quickly found that I had trouble explaining industry-specific concepts in a general way. Even my mentor, at times, struggled to understand my jargon-filled explanations. As person after person began to dismiss my work, I quickly learned that a project with merit can be easily overlooked and misunderstood if it isn’t well-explained. It wasn’t until I learned to use more general and relatable explanations to communicate my work that others were able to truly understand my research.

The best way I’ve found is to give myself a time frame for disappointment, then get back on my feet and look at the setback from a different angle. My research is a coding project, and I once accidentally cleared everything off of my server, essentially forcing me to start from scratch. I was incredibly frustrated. I gave myself a weekend to do anything but code to get my mind off the annoyance, but then jumped right back into my project.

Over time, I started to treat the setback as a learning experience. I had no choice but to redo everything, and this allowed me to fix old problems and write neater, more concise code while ensuring that I had a complete understanding of every algorithm I had used. By letting myself cool off and recognizing that it’s normal to feel anger and disappointment, I was able to revisit the problem with a fresh mind and a new perspective.

What issues do you feel all countries should unite to take on?

Climate change. Global warming isn’t an issue that any one country can take on alone. It shouldn’t be an issue that relies on individual citizens taking public transport or biking over driving. It’s an issue that requires universal adoption of carbon tax/cap and trade systems, infrastructural changes towards renewable energy and cooperation between developed and underdeveloped nations to aid those without the resources to face the repercussions of climate change. Honestly, as an American, I’ve been disappointed that while so many other countries have already made progress, the current administration refuses to acknowledge climate change, let alone take any action towards solving it.

I often drift towards photography to unwind. I try to go to NYC at least once a week to photograph its street life and architecture. Surprisingly, there’s no better feeling of peace and tranquility than being in the streets of one of the busiest and most lively cities in the world. There’s just something so incredible and relaxing about hearing the camera shutter as the perfect shot aligns itself. While I spend most of my time working towards my aspirations, photography reminds me of the importance of appreciating the fleeting moments.