In this year’s competition, one of the top winners in the category of biochemistry, Annika Morgan of Redding, Connecticut, investigated a way to make vaccines and other viral medications storable at higher temperatures to reduce the cost of transporting them long distances.

Here is our conversation with Annika.

Murphy’s Law applies to research just as much as any other field. Anything that can go wrong, will go wrong. Whether it’s unexpected results, paperwork and logistical issues or anything under the sun, we run into problems nearly every step of the way. No experiment is going to go exactly as planned and learning to adapt is critical. When there’s a bump in the road, I take a deep breath and walk away from what I’m doing. Tunnel vision is fatal to good research and you always need to keep the bigger picture in mind, which often requires you to step back and reexamine your work. You shouldn’t be afraid to explore a new direction or even abandon an idea; if something isn’t working, figure out why and change it. Don’t force it to fit your expectations. The most important thing is to never lose heart. Setbacks are draining and defeating, but they also foster the most growth in you as a researcher and facilitate new ways of thinking. When you find yourself in a rut, relax because it is not the end of the world, and whatever you do, do not give up on yourself.

Hard work makes the research world go round. The poster that you see beautifully displayed in a booth is just the very tip of the iceberg of what went into a project. In order to be successful in this field, you need to be willing to put in the work, not just in performing your actual research but in educating yourself on an entire branch of science. No one sees the hours I spent watching recorded college lectures on cellular and molecular biology or all the times I made a mistake and had to restart an entire experiment. All of that is just par for the course. Persistence and hard work are necessary for success. 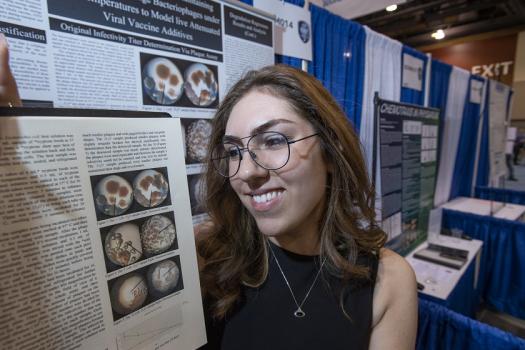 Every research nerd gets asked this constantly, but I’ve found that among those who win their categories every year, their research is their fun. It is nearly impossible to dedicate this much time to something without truly enjoying it. I truly enjoy doing research so I don’t see it as a task that I need to unwind from, but at times it does get stressful and I need to change it up.

I can’t sit still so my “unwinding” is probably a bit different than most people’s definition. I’m an EMT and spend a lot of my time responding to 911 calls on the ambulance and treating patients. I love to see the impact of my medical care up close, something that I don’t get to see as much through my research even though it’s medically oriented. I also work in a busy restaurant, so I get my exercise running from table to table all night. I know that neither of these things sound relaxing, but they are to me. I love constantly moving around and doing many different things to keep my mind active.

What is something you don’t currently understand that you wish you understood?

I work in the physical world. I hold petri dishes, look through microscopes and incubate samples. I understand results that I can see with my bare eyes. Thought experiments and projects that rely entirely on thought and theory (mostly math and physics) are fascinating to me because all the experimentation happens with a pencil and paper, and in the future I want to learn how to perform research that is grounded in the use of theorem and theory to prove findings and not simply physical results.

Never underestimate yourself. My research started out as a project for my AP Chemistry class, but ultimately led me to the top of my category at ISEF.

To be honest, I never believed in myself. I felt underqualified and out of place when I competed next to other projects done in high-level labs with respected researchers. I learned that my anxiety and apprehension get me nowhere but into a rut. Never think you aren’t capable of great things, because with enough dedication and hard work you can do it. I’ve learned to stop doubting myself and comparing myself to others because I can often be my own greatest enemy. When it comes to my own success, I need to learn to look past my doubts and fears.