The Chesapeake Bay is full of critters. The 30 Broadcom MASTERS finalists got hands-on experience wading into the bay to collect aquatic wildlife at the Smithsonian Environmental Research Center (SERC) on Monday. 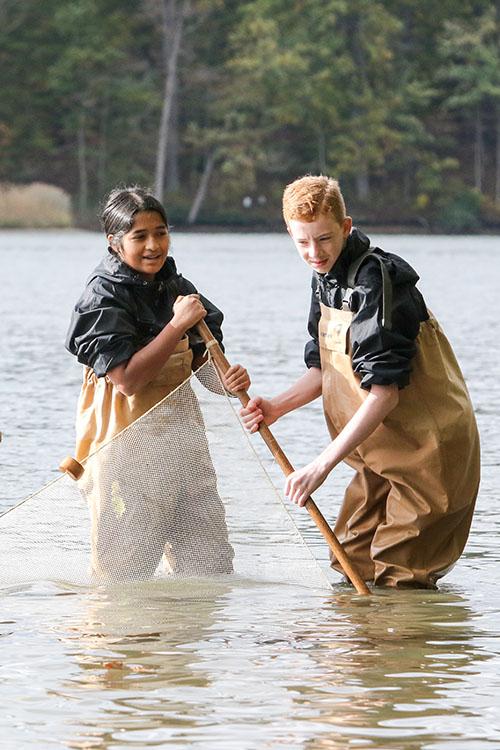 “I enjoyed [being] put me out of my comfort zone, as I’m not usually exposed to such hands-on research in an aquatic environment!” said Adishree Ghatare, one of the finalists.

She was referring to the seining challenge the finalists encountered at SERC, where finalists had to collect wildlife from three different micro-ecosystems in the Chesapeake Bay., including woody, open water, and grasses. They found Hogchoker fish, reed fish, white female perch fish, kill fish, anchovies, and jumper shrimp.

Teams of finalists waded into the bay, moved their nets slowly through the water at a 45-degree angle, then brought the nets to shore to collect wildlife into buckets. Then, they analyzed the different species and brainstormed reasons why these species lived in certain areas. Through this challenge, the finalists learned about various species in the bay and their migration patterns and the proper seining technique. 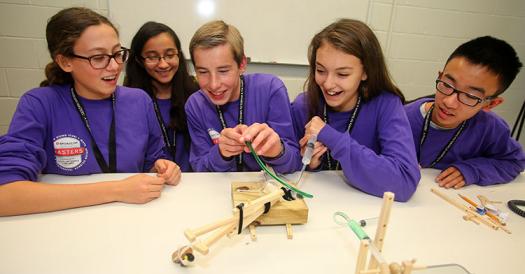 The purple team building their 3D model of a blue crab arm.
PHOTO COURTESY OF SOCIETY FOR SCIENCE & THE PUBLIC/LINDA DOANE.

Another challenge during the day was building a robotic blue crab arm. The finalists became biomimetic engineers tasked with designing and building a 3D blue crab arm that could be attached to a movable cram robot for underwater exploration using hydraulics.

The finalists received bonus points if they were able to design a claw that could open and close to grab a “rescue item.”

Through this challenge, the finalists learned how blue crabs molt their exoskeletons to grow. Then, the outer layer hardens into a new exoskeleton. Crabs will use hydraulics to move around until their shell hardens. 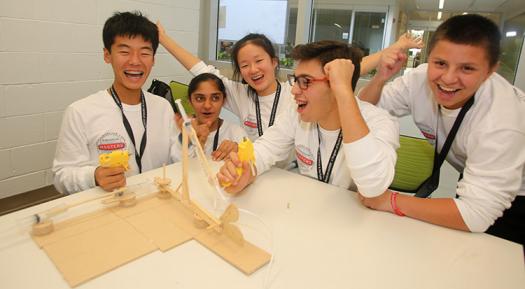 The white team celebrates after making a robotic blue crab arm.
PHOTO COURTESY OF SOCIETY FOR SCIENCE & THE PUBLIC/LINDA DOANE.

They also learned about Pascal’s Law, a principle in fluid mechanics that states that a pressure change occurring anywhere in a confined incompressible fluid is transmitted through the fluid in a way that the same change occurs everywhere.

“I enjoyed learning about the hydraulics and engineering process because it was new to me and I ended up finding it really interesting,” said Olivia Lazorik. 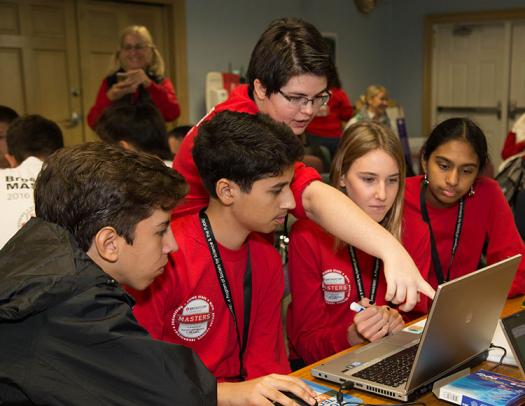 Members of the red team discuss their big dataset.
PHOTO COURTESY OF SOCIETY FOR SCIENCE & THE PUBLIC/BRADY ROBINSON.

The finalists also competed in the Computer History Museum’s big data challenge, where they were given a big dataset on voter turnout rates for the 2012 presidential election. The data was broken down by state, with different subsets such as eligible votes, non-eligible votes, etc. The finalists had to design a visualization with the dataset.

The challenge was telling a story with the data. One idea the finalists had was using data on the number of eligible voters in a state and the number of people who voted to track voter trends on specific issues and to target specific audiences to promote voting. 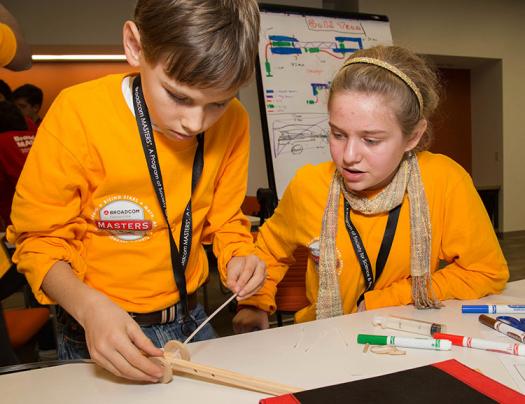 During this challenge, the finalists learned about the history of big data and how Univac, a computer, accurately predicted the outcome of the 1952 presidential election, which Eisenhower would win by a very large margin. This wasn’t announced in a live broadcast because people didn’t believe it was accurate.

“I liked learning about the Univac and it was really neat how it correctly predicted the outcome of the 1952 election,” Eleanor Sigrest said. “But humans didn’t believe it, since these days we are so used to human error.”

The finalists also learned more about the census and how Herman Hollerith created punch cards to help make the process of collecting and organizing census data quicker. They also heard about the London public transportation system, which is collecting data to learn commuter transit patterns.

That night, the finalists had a Halloween party and dressed up in costume.