Weather balloons have been used for research for over a hundred years. Now, high-altitude stratospheric research may become even more accessible thanks to the work of several students at Stanford University.

Paige Brown, a first-place winner at Intel STS 2016 (now Regeneron STS), is the lead mechanical engineer working on the ValBal and developing a standardized modular payload system. Through the project, the students use latex weather balloons to launch scientific and experimental payloads into near-space — twice as high as where planes fly.

ValBal, short for Valve-Ballast, uses a gas venting vale and ballast dispenser, which stabilizes the balloon’s altitude. The balloon system can fly autonomously at any chosen altitude, up to 80,000 feet. Standard flights have the balloons ascend to up to 120,000 feet and travel up to 200 miles for 2-5 hours. The team has improved the balloon’s design with 3D printing and light-weight materials, which makes it more durable and cuts assembly time by 20 hours.

“We’d ultimately like to circumnavigate the world,” she said.

Our alumni are science champions. You can be too by joining the Society.

Although similar to Google’s project Loon, Paige’s design offers a lower cost option for long-duration high-altitude research. “They use a superpressure balloon which is prohibitively expensive at upwards of thousands to millions of dollars,” Paige explained.

We want to make this research accessible to anyone, even a hobbyist.

“We want to make this research accessible to anyone, even a hobbyist,” Paige said. “We’re working on making a kit version.” 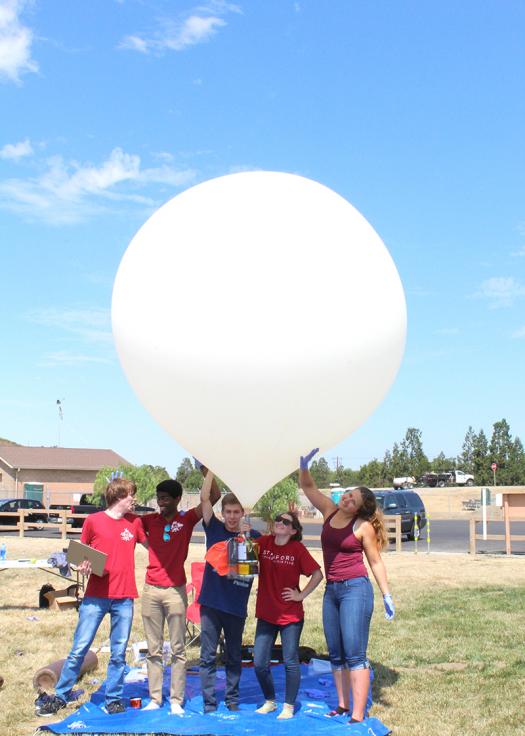 “I’d like to eventually go into a career in research and development in the aero-astro sector, working at a place like SpaceX, NASA, JPL,” she said. “Developing materials for spaceflight or working on space habitat design, using closed-loop systems. Optimizing those and making it possible for people to travel to places like Mars.”

“It’s almost a complete 180 from what I thought I wanted to do when I got to college,” she said. Paige’s Science Talent Search research focused on affordable water filters, an area she still researches in her spare time.

“I went to career fairs and looked at what the environmental engineering companies were doing. Even though it was great work, it wasn’t so exciting to me. It wasn’t what I wanted to commit my life to.”

She still believes in sustainability and cleaning up the environment. But “I realized it was ok to change what I was interested in and take a different path.” She now plans to major in chemical engineering and then get a Ph.D. in material science.

I want to make it possible for people to travel to places like Mars.

Paige started to learn about science careers first through science fairs. “Participating in science fairs really got me where I am today,” she said. “They helped me develop my public speaking skills, communication, networking. They helped me see the importance of science and how it could become a career for me.” And she learned how to write a scientific research paper in high school, which she says should happen sooner; most people start learning the skill in graduate school.

Participating in science fairs really got me where I am today.

Now, she’s able to present her research and ideas in concise statements, especially to the public. “There’s a big gulf right now,” she said. “People don’t understand why science is necessary, there’s a lack of legitimate communication between scientists and the public. A lot of people don’t trust it.” Science fairs, she said, helped her figure out how to best explain important science.

This article has been updated to reflect the ValBal’s current flight world record.