Paul Strode is a biology teacher at Fairview High School in Boulder, CO. During Intel ISEF 2019, he held a seminar called Teaching Students to Think Like Scientists, encompassing what he believes are the failures of current science teaching methods. He believes that critical thinking is one of the most important skills a growing mind must practice in order to become a productive member of society, but, unfortunately, it is not emphasized enough in today’s classrooms.

Paul cited neuroscientific research that argues children are born with a natural curiosity about the world around them. They use all five senses to learn concepts such as cause and effect, gravity, climate change—you name it. But Paul feels that, all too often, curiosity is eventually unlearned through rigid school curricula that focus too heavily on rote memorization.

To illustrate his viewpoint, Paul relayed a story about his daughter, a curious fourth grader who has always been interested in science. When asked to review one of her assignments, Paul was bothered by a hypothesis her instructor required her to defend, even though she disagreed with it. Paul’s daughter knew that the established hypothesis was not supported by logical reasoning, but instead of forming a new one using her own critical thinking skills, she accepted the prescribed hypothesis as infallible. When Paul asked why she constructed her hypothesis the way she did, she explained to him that she just did not want to contradict the teacher and receive a failing grade. 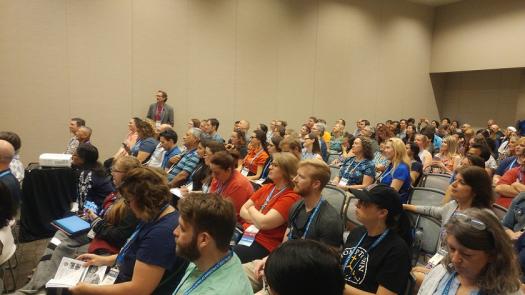 There were hardly any open seats at Paul Strode’s symposia session on teaching students how to think more critically.
PHOTO COURTESY OF SOCIETY FOR SCIENCE & THE PUBLIC

Paul believes one of the major problems with the education system is the uncritical acceptance of what is taught in textbooks or by teachers as fact. According to Paul, many classroom materials are teaching incorrect information that no one dares to question. In science classrooms, he explained, the accepted way of teaching what a hypothesis is consists of using an “if, then” statement. For instance: if you hit a tree hard enough, then an apple may fall. While this “if, then” method may lead to a strong hypothesis some of the time, it is more often than not simply asking students to make a prediction without observation. In the case of Paul’s daughter, she was regurgitating the information she was taught by her teacher, not using her own critical thinking skills to make observations and draw conclusions based on what she had observed.

Nevertheless, Paul has hope for science education. Recently, the National Research Council of the National Academy of Sciences published a framework for K-12 Education, where they outlined what science education is now and what it could look like in the future. How do we rely less on rote memorization and theory and instead include more investigation and design to help students make sense of the world around them? To start, Paul suggests that new curricula should focus more on modeling to explain phenomena, and encourage students to learn from multiple sources. To become the engaged citizens and thoughtful leaders and learners of tomorrow, it is important that the STEM students of today learn to examine research and concepts from multiple angles and use the information available to them to make the best possible conclusions, rather than accept what they are told at face value.