By Caitlin Jennings, Communications Specialist, Society for Science & the Public 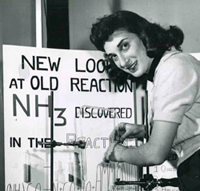 Ellie Ehrenfeld (Science Talent Search 1958) has published more than 150 papers, served as the Director of the Center for Scientific Review at the National Institutes of Health, is working with the World Health Organization to eradicate the polio virus, and has many other distinguished achievements. Ellie is now a Scientist Emeriti and she brings her vast knowledge of biology to global public health efforts. However, like all great scientists, she had to start somewhere, and her somewhere was a high school chemistry class.

“My [STS] project was very simple:  In a junior year chemistry class lab, we had used the reagent ammonium dichromate, a common oxidizing agent, whose decomposition products were described in our text book.  But I smelled ammonia, which was not supposed to be among the products.  I brought this to the attention of my wonderful, inspiring chemistry teacher, Mr. Benjamin Karp.  He suggested I work out what the reaction was that produced ammonia, and when I did, he suggested that I apply for the Westinghouse STS,” Ellie says. I was quite surprised when I was notified that I was among the finalists, and was invited to Washington, D.C.”

The STS award was truly a life-changing event for me,” she says, noting that the scholarship helped her go away to attend college, when she couldn’t have otherwise, and gave her the confidence to apply for a pre-college research program at Jackson Laboratories, where she made important contacts and learned valuable skills before even starting her college career. But, perhaps even more important, she notes, “My STS project provided the first educational experience ever in which I felt that I had actually discovered something new, that had not been known before.  For the first time, I did not just learn what others had already discovered, but discovered something myself.  This was a major new accomplishment for me — a skinny, young girl of immigrant parents who spoke English with an embarrassingly (to me) thick accent.  It had a major impact on my drive to do research as an undergraduate and probably even after.”

To the accomplished scientists of the future, who are making their own discoveries in high school chemistry classes, she advises: “Science is such an essential, important and far-reaching contributor to almost every aspect of our society — there is no end of possibilities of how it can be developed, used and applied. The important thing is to find something that you love to do, that you have some passion about, and dive in.”