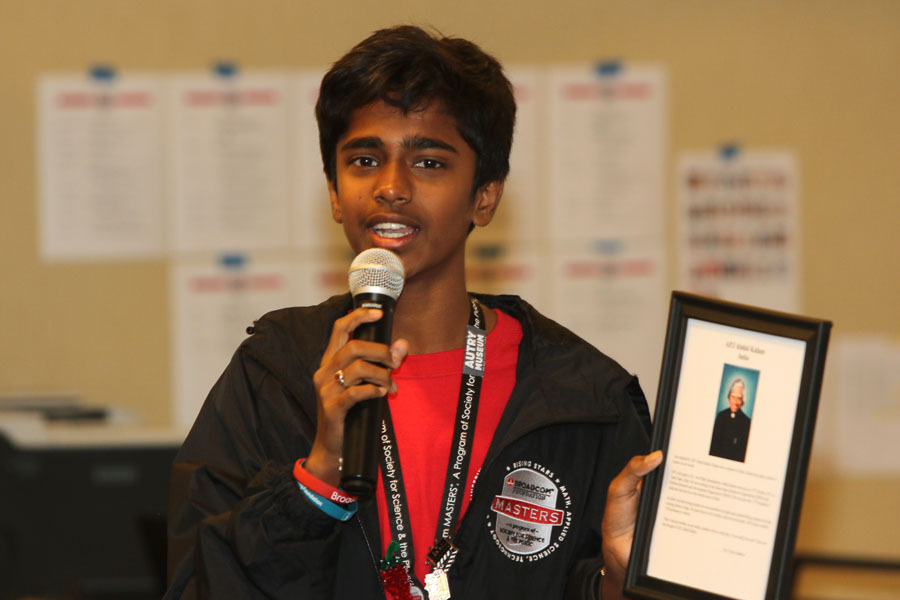 Science is a collective of global thinkers bringing next-generation solutions to real-world challenges. But often our view of what a scientist is, or how s/he spends their working day, is very narrow. Broadcom MASTERS International, a program created by the Society for Science & the Public in 2012 with the Broadcom Foundation, wants to change all that.

In May, 26 middle schoolers flew into Los Angeles, California — all rising global stars in math, applied science, technology and engineering, from a total of 19 countries, including: Australia, Brazil, China, India, South Africa, and the UK. They had been selected for excellence in the projects they presented at international science fairs. The purpose of the program was not to put them in competition against each other, but to celebrate them. Broadcom MASTERS International establishes a young cohort of international scientists — called delegates — and takes them on a seriously scientific (and super fun) schedule of activities, designed to broaden their minds and views of what science is.

No matter how crazy your idea might be — do it — it might turn out to be amazing.

The delegates worked on marine conservation experiments (getting nice and muddy) aboard a boat on Newport Harbor with scientists from Discovery Cube Ocean Quest. At the University of California, Irvine, engineers instructed them in 3D modeling and used Arduino-powered plant sensors to gather bio-data. They also met alumni from previous years, who told them where they were studying (some at MIT or Stanford) or interning (SpaceX and Google, amongst others). At the Getty Conservation Institute, the delegates met materials scientists protecting the world’s cultural monuments and works of art, using the latest technology and tools. A rocket scientist from NASA JPL gave them a rundown on space technology and news from the Mars missions, before hosting a tour of meteoroids, telescopes and Foucault’s Pendulum at the Griffith Observatory.

Braeden Doherty, 11, from the United States, really enjoyed speaking with the alumni. “I’m now inspired to go further and discover things,” he said. “Especially after talking with the alumni yesterday. One of them told me, ‘No matter how crazy your idea might be — do it — it might turn out to be amazing.’ I loved hearing that.”

New ideas about science careers emerged throughout the week. Micaela Roth, 12, from the United States, said, “I never knew you could become a rocket scientist as a career — I thought it was something younger kids did as a science project.” Many of the others, including Vishwas Reddy and Ujwal Aradhya, both 14 and from India, agreed that space science was an appealing area to go into. “Maybe I’d like to study astronomy next,” mused Aradhya. Jun Young Kim, 13, from South Korea, said he was inspired by both the environmental scientists at Ocean Quest as well as space scientists from NASA. “Griffith Observatory was very fantastic,” he said. “There are so many undiscovered aspects of the universe that I’d like to seek.”

Smart will only take you a certain amount of the way. You need to work hard.

Maria Isabella Schneider, 15, from Brazil, said, “Broadcom MASTERS has given me an opportunity to see inside universities that I might apply to, like UCI.” The wide range of engineering fields of study offered at UCI also sparked the curiosity of Eliza Martin, 15, from Australia. “When we met the Dean of Engineering at UCI, he broadened my knowledge of what engineering is,” she said. “I thought it was just designing cars, but now I realize there’s so many different aspects and many paths. I’m not sure what I want to be yet, but I have a much wider set of ideas now.”

Alongside the field trips, the Broadcom MASTERS International delegates spent time sharing with one another, including a wonderful project called “Innovator Share” where they picked a top scientist from their own country and shared why and how they were inspired.

Allie Stifel, the Society for Science & the Public’s Director of the Regeneron Science Talent Search and the outgoing Broadcom MASTERS Program Manager, explained why the activity was important. “Innovator Share started as a way to get the delegates to shine a light on their own country and culture; picking scientists they admire and bringing that knowledge to others. It allows them to not only practice their spoken English but also see that science is a global language — science is everywhere.”

Science is a global language — science is everywhere.

Of course inspiration, education, and everything else that happens between middle school and the great big world outside are only part of what’s needed to succeed in today’s fourth industrial revolution. Goutam Chattopadhyay, Senior Research Scientist at NASA JPL, asked the Broadcom MASTERS International delegates, “What are the traits you need to be a scientist?”

There are so many undiscovered aspects of the universe that I’d like to seek.

There were many responses from eager delegates holding up their hands on the lawn outside the Griffith Observatory: curiosity, cleverness, communication skills, and so on.

Chattopadhyay responded, “Yes, but smart will only take you a certain amount of the way. You need to work hard.” Not that this will be a problem for the Broadcom MASTERS International cohort. At each stop, the first questions to each scientist they met was, “What did you study at university to get here?” and “which courses do you recommend I take in high school to get there too?”

I’m not sure what I want to be yet, but I have a much wider set of ideas now.

Hard work is a given with this group. Perhaps the most important aspect of their time in L.A. was broadening their minds outside of school-level academic achievement.

If the delegates needed any more evidence that science is everywhere — after an extraordinary set of activities and encounters with real-life scientists — all they had to do was read the back of their T-shirts. The Broadcom MASTERS International delegates were smartly clad in baseball caps and red T-shirts emblazoned with no less than 60 job titles, including cartographer, forensic scientist, geologist, and imagineer. Confused about that last one? Think Disney, a major global employer of crazy, gifted scientists since the 1940s.

Of course, science is an ever-evolving field. As one of the alumni said during breakfast at the Autry Museum of the American West, “You probably can’t take classes today in the science and technology that will matter in 20 years time — so get involved in stuff outside your course when you get to college.”

Because who knows where the 2017 cohort of Broadcom MASTERS International will end up.