“These finalists aren’t just our future leaders. Right now, they are leading the way,” said Maya Ajmera, President & CEO of the Society for Science & the Public and Publisher of Science News, at the Opening Ceremony of Intel ISEF 2018. This is the 69th year of this annual science competition, the largest science competition for high school students around the world.

A simple piece of technology can change the whole world.

Nearly 2,000 high schoolers from 81 countries, regions, and territories gathered in Pittsburgh, Pa. for the competition week. For the first time, Guatemala and Latvia join the roster of nations represented.

“As I look out at this huge audience, everyone here is an innovator and leader,” Maya said. “This year, we’ve seen just how powerful young people can be, like the young people in Parkland, Florida. Like them, you have a voice, and you should be heard.”

Roz Hudnell, President of the Intel Foundation and Vice President of Corporate Affairs of the Intel Corporation, echoed Maya’s sentiment. “If history repeats itself, there could be a future Nobel Laureate amongst you,” she exclaimed to a cheering crowd. 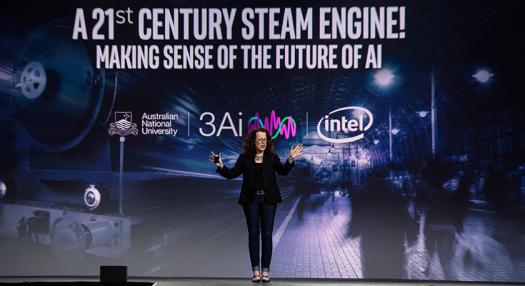 Genevieve Bell was the keynote speaker at the ceremony. She looks to the history of the steam engine to understand the future of artificial intelligence.
Photo courtesy of the Society for Science & the Public/Chris Ayers.

“At Intel, we recognize that in order to grow our impact it’s imperative that we invest in the next generation of innovators,” Roz explained. “That’s all of you!”

The keynote speaker was Genevieve Bell, the Director of Autonomy, Agency, & Assurance (3A Institute), Florence Violet McKenzie Chair, and Distinguished Professor at the Australian National University, and Vice President and Senior Fellow at Intel. She offered the finalists insights into the future, through history. “History doesn’t give you answers, but sometimes it gives you better questions,” she explained.

If history repeats itself, there could be a future Nobel Laureate amongst you.

Genevieve, a futurist and anthropologist, studies how artificial intelligence (AI) will affect our world in the future. At the 3A Institute, she’s doing research on who the designers of AI and regulators of AI safety will be. How can we ensure the safety and security of technology that knows how to modify its own behavior without human intelligence?

In her keynote, Genevieve compared the potential challenges and humanitarian benefits of AI to the 19th century steam engine. “Steam engines built the modern world,” she said. “They changed how machines worked, how goods were moved, they reshaped cities and whole countries.”

The role of the steam engine in society and human life was feared by many at the time. Similarly, today people are worried about the consequences of AI. “It was, in the words of the 21st century, a ‘complete disruption,'” Genevieve explained. “A simple piece of technology can change the whole world.”

These finalists aren’t just our future leaders. Right now, they are leading the way.

Steam engines changed society and culture, and policies were written to regulate it. When locomotives started running, people had to standardize time in local communities as railway time. “If AI is just the beginning, what will be its metaphorical trains?” Genevieve asked. 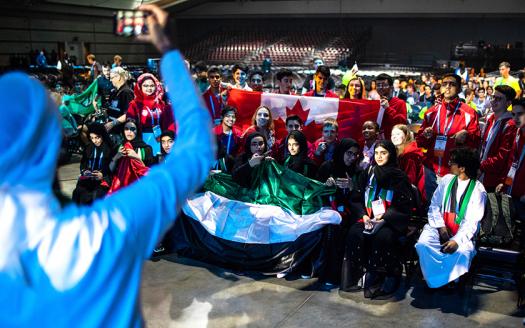 A big part of the opening ceremony is sharing country pride. The Intel ISEF 2018 finalists hold up flags and posters.
Photo courtesy of the Society for Science & the Public/Chris Ayers.

She left the finalists with an important message: “It’s easy to make a fetish of Silicon Valley and think that’s where all the ideas come from. But look around this room. Ideas come from everywhere.”

At the conclusion of the ceremony, representatives from the 81 countries, regions, and territories ran onto the stage, hoisting flags and posters decorated with their country pride. View photos from the opening ceremony.

“The education that each of you will receive this week is absolutely impossible to get in the classroom,” Maya told the Intel ISEF 2018 finalists. “You’ll learn so much just by interacting with other finalists, people who approached projects from a different perspective. And most importantly, you’ve found your people — friends who will last a lifetime.”