Overnight success rarely occurs in science, but that should not deter anyone from aspiring to make a difference. During the Innovation Dinner, the Regeneron Science Talent Search 2019 finalists learned about the importance of persistence in the face of doubt.

Regeneron Pharmaceuticals wasn’t profitable in its first 25 years in business. Today, it has seven FDA-approved treatments, all of which were homegrown in their own labs. To put this accomplishment in context, only about 30 novel medicines out of thousands get approved in an average year. What is the company’s secret sauce?

“It isn’t about making a quick buck, it’s about trying to make something foundational. Science can take a lifetime to get right,” said George D. Yancopoulos, MD, PhD, Regeneron’s President and Chief Scientific Officer. As the only biotechnology company started and still run by physician-scientists, Regeneron didn’t let pressures to make a profit from Wall Street derail their science-driven approach. Instead, they focused their efforts on building technologies that didn’t exist yet to later create the weapons needed to fight disease. That dedication and long-term vision paid off.

“Science can change the world, I truly believe in that in my core,” expressed George. As the son of Greek immigrants, George recounted the story about his grandfather, who was caught and jailed as a freedom fighter, but managed to escape to Vienna, Austria. There, he saw electric lights for the first time. Although he had no formal education, George’s grandfather devoted himself to learning about the magic he witnessed and ultimately became one of Greece’s first electrical engineers. This story inspired George to become a scientist as well, which led him to participate in the Science Talent Search in 1976, then sponsored by Westinghouse.

George’s experience as an STS finalist was life-changing. “When I met the other finalists, I thought they would realize I wasn’t as smart as they thought, but I gained validation and that in turn made me realize I could do something,” remembered George. Referencing the incredible history of the Science Talent Search, George told the students it was now their turn. “We have to get the brightest scientific minds super excited about changing the world. You all have your own stories to share.” 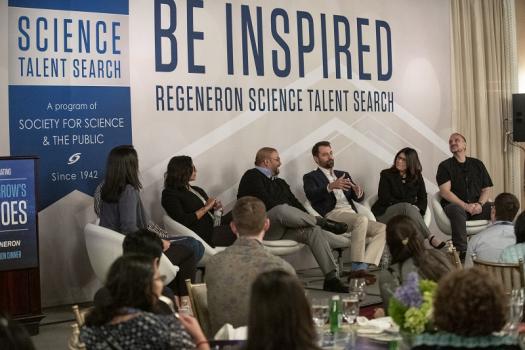 Leaders from Regeneron who participated in the panel discussion following George’s remarks echoed the same passion for science. Several panelists were immigrants or children of immigrants, just like George, and hail from countries like Sri Lanka and Syria. Sumathi Sivapalasingam (Senior Director of Clinical Sciences), who is also an alumna of the Westinghouse Science Talent Search in 1986, came to Regeneron in search of teamwork and collaboration, things that were missing in her prior academic career. For Noemi Negron Colon (Executive Director of Quality Control), biotech offers another opportunity. “You can see how your work impacts real people and that is very satisfying.” Nouhad Husseini (Vice President and Head of Business Development) emphasized Regeneron’s commitment to innovation, while reaffirming that patients and science come first. “If you come up with an important drug, the business opportunity will be there.” 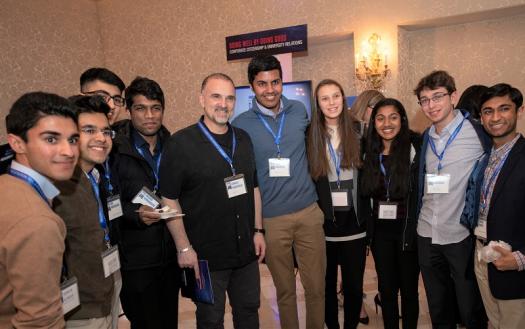 Finalists interact with George during a dessert reception following the panel discussion.
Photo courtesy of Society for Science & the Public/Kyle Ryan.

It was clear all the panelists enjoyed going to work every day at Regeneron. “We’re a select team that loves our environment,” summed up George. He also pointed out that there are many ways to succeed in science. The model embodied by Regeneron is just one example, but for George, there is value in bringing talent together—it multiplies leadership potential.

By the end of the night, the students were eager to learn more about Regeneron and its mission from George and the panelists. Some even expressed interest in possibly joining the company one day. Lucky for them, this wouldn’t be a pipe dream: ten Regeneron STS alumni interned for Regeneron just last year.