Ten years ago, on September 10, 2001, the Society notified the 40 finalists of the Discovery Channel Young Scientist Challenge to let them know their hard work had paid off and they would be coming to Washington, D.C., to meet the other finalists and share their impressive science projects with the community. The next day’s events spurred uncertainty as to whether the event would still happen. But all 40 finalists and their parents decided, even amidst the heightened security levels, that it was important to come. Here are some of their recollections on the event, as well as a journal entry from finalist week.

I remember the time before DYSC being full of apprehension and confusion. No one knew what was going on; a lot of people were asking my parents if they would even let me go. Traveling was scary too. Security was at an all time high. Lines through security were two hours long, you had to show ID at security and to board the plane, and once on the plane you could not leave your seat for the first 30 minutes or last 30 minutes. On top of that, soldiers were standing watch with AK47s — which for a girl who’d only seen guns on T.V. before was definitely a new experience.

Once we arrived at DCYSC, the only words I can use are whirlwind and exceptional. For most of us, this was our first exposure to the media, and most of us had our progress followed by our home news teams — camera crews, radio interviews, and print articles — it was a regular three-ring media circus. I can tell you it was quite the ego-boost for a young teen! I can understand why we were all such great news stories; we represented hope for the future in a time of fear.

On a more personal and important note, I’ll always remember the people from DYSC. We were split into teams to compete during the day, but in the evenings, we’d congregate wherever we could find space. It started in hotel rooms, then spilled over to elevator lobby areas. Well you can imagine that a group of tweens in a hotel lobby can get rather loud — so the hotel found an empty ballroom for us to take over. We’d meet in the ballroom every night, and just hang out. One of the contestants sent his dad to Radio Shack for an adapter to plug one of our Walkman into the stereo system and share our music.

DCYSC was without a doubt one of the best experiences of my life. I still stay in contact with many of the competitors of that year. I look for those updates on important life events. In the last 10 years we’ve gone to college, some of us have gotten married, and we tragically lost one of our own. I think we all took those highs and lows to heart — these were our friends.

It was a very special time for all of us. I still remember the Congress fleeing D.C. just as we were flying into the city, those exploding manhole covers (not terrorist related, but scary nonetheless), all of the museums being strangely empty … no lines, no waiting … And, our children taking over an unused hotel ballroom and sending the dads out with a detailed list of stuff to get at Radio Shack which they needed to hijack the sound system in the room (got to love those geek kids) just so they could all be together in the evenings.

I was actually interviewed by a major news organization, don’t remember if it was 60 Minutes, 20/20, or something similar when we arrived in D.C. Sad to say, the news program went with a story on a school that cancelled their field trip after 9/11 rather than all of us, and I will always feel so proud, because it was ALL of us who flew into D.C. in the wake of that awful day. I remember the elation of that phone call which made my child a finalist and then all of the horror that followed.

When I awoke this morning, I wondered: If I were 13-years-old and had to give a speech that would decide a Science Scholarship in front of a panel of judges, what could anyone say or do that would help? Most likely nothing … except for saying that I had permission to go home, immediately!

But I’m a mom. I had to do something. Then I looked out my window and I had it. Rather than staying cooped up, practicing in a hotel room, we could escape.

Here we were in Washington D.C., only a few weeks after the September 11th tragedies. What else could we do but appreciate just being alive. Our small problems were nothing compared to so many in the world, both now, and in the past.

Just four blocks away stood the Lincoln Memorial. It is there that we would spend our morning. Walking up to the imposing figure of Abraham Lincoln, we felt rather small and unimportant. As we stood on the great marble steps, Liz gasped and realized, “This is where Martin Luther King gave his famous speech!” The resounding echoes of his words still rang all around us.

We sat in the shadow of Lincoln and King. The spirit of King watched as Liz scratched in last minute changes to her speech and underlined words to emphasize. And Lincoln, himself, sat unmoving, listening as Liz settled down to re-read her speech yet another time. An hour passed.

When Liz was finally done, she took a long look around. There under her very feet was the step where Martin Luther King had dreamed. To her right, etched now in stone, was the once-doubtful Emancipation Proclamation. And to her left was the gray ghost of the wall for the Vietnam Veterans whose dreams were cut too short. We could only imagine if all this, and so many more of our monuments and our people, had been destroyed a few short weeks ago. When Liz finally turned to look at me, I knew she understood our reason for coming.

“Mom, it doesn’t really matter how perfect I am today, does it? It’s what I am going to do with the rest of my life that matters.”

Through blurry eyes, I reached to hug her. She had just been proclaimed a winner. 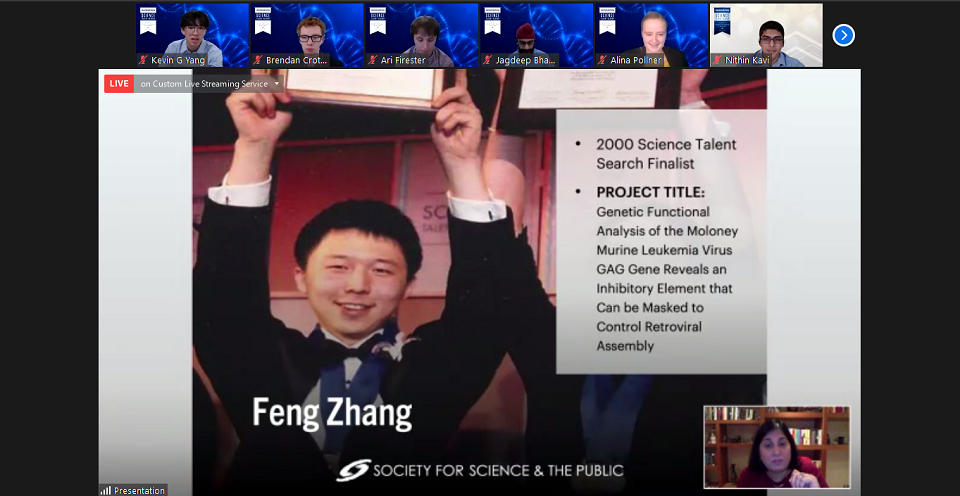 CRISPR pioneer and STS alumnus on the “joy of doing science”

ICYMI: The role of CRISPR in the fight against COVID-19