How can math be used to make the world a better place?

During finals week of the Science Talent Search (STS) 2019 in DC, STS finalists had the opportunity to learn from fellow STS alumna, Moon Duchin (STS 1993, ISEF 1993). Moon’s STS project during her senior year was on the geometry of numbers, titled “Applications of Minkowski’s Theorem to Classical Number Theory.” Today, 25 years later, she is an associate professor of mathematics, a senior fellow at the Tisch College of Civic Life and the founding director of the interdisciplinary program in Science, Technology and Society at Tufts University, coincidentally also STS for short.

Moon’s current work is focused on applying mathematics to political redistricting, also known as gerrymandering. The subject, according to Moon, “only makes sense if you think about it in an interdisciplinary way.” This involves considering the human interfaces of data and algorithms, work Moon was doing just hours before meeting the finalists for dinner. She and other experts had filed an amicus brief to the Supreme Court regarding a case about political districts in North Carolina and Maryland.

“Both parties gerrymander as much as they can,” Moon explained. To illustrate how math can evaluate fair representation, Moon showed the students various state maps where districting was done by hand. She directed their attention to the districts that resembled “tumors and fractals,” pointing out that such gross shapes were signals of discriminatory intent. Even with new redistricting software, results can still be biased and substantively partisan. 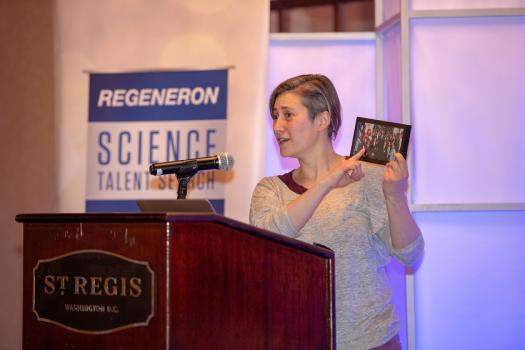 Moon showing students a picture of her STS 1993 cohort.
Photo courtesy of Society for Science & the Public/Chris Ayers.

Moon’s research addresses this issue by using math, specifically Markov chains, to determine whether a proposed districting plan is normal or an outlier based on a distribution of all possible plans. “If you run this process long enough, you will end up with a representative set of the full space even though the full space is too big to explore,” elaborated Moon. The end result shows how districting plans can be expected to behave and indicates when they have gone too far.

The students were very intrigued. When Moon opened the floor up for questions, they asked about how factors such as urban density and the central limit theorem could impact district maps. 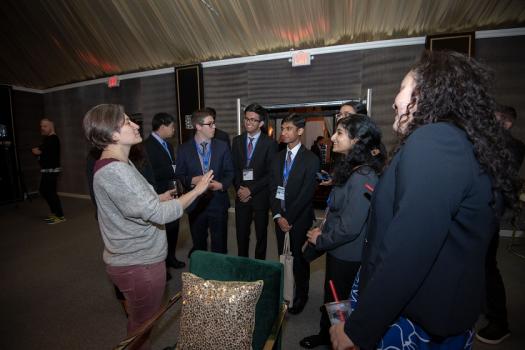 Moon discussing her research further with several finalists at the dessert reception.
Photo credit for all: Photo courtesy of Society for Science & the Public/Chris Ayers.

As the night wrapped up, Moon implored the students to ask “what is the science telling you?” in their own research pursuits. She imparted the importance of using empirical methods to answer questions that “your gut cannot answer.” Furthermore, Moon encouraged the finalists to use their work as platforms to involve others. “Forget about tumors and fractals. It’s about having lots of conversations about how we want democracy to function and then design and analyze systems accordingly.”