Every year, the brightest young scientists from around the globe come together to participate in the world’s largest science fair, the Intel International Science and Engineering Fair (ISEF).

One of this year’s winners, and a recipient of a $5,000 award, Katie Lu of Springfield, Missouri, found a method for removing oil from water using nano-ferrofluid, a suspension that contains magnetic nanoparticles. This concept can also be applied to the removal of microplastics from our oceans as well.

Here is a conversation we had with Katie:

My experience was amazing! I remember on judging day, walking the exhibit hall and looking at the people gathered outside waiting to get in. My teacher turned to me and said, “That’s the future right there.” That feeling really summed up the experience at ISEF! It was so amazing to spend time with all of these people who are going to do amazing things in the future. Many of the participants are from foreign countries and it was really great to meet a lot of them.

The two largest lessons I’ve learned are to not fear failure and to not be afraid to ask for help. It’s really easy to be overwhelmed and wonder if what you’re doing is going to work out, but even if it doesn’t, it’s ok! It’s really important to experience failure and know what it feels like—it makes success feel earned when it comes. Also, it’s tempting to want to do everything by yourself and not ask for help when you’re struggling, whether it be with procedures or the data analysis. Asking for help is good. You learn how to do things a lot faster and more efficiently. Just make sure not to annoy people too much. 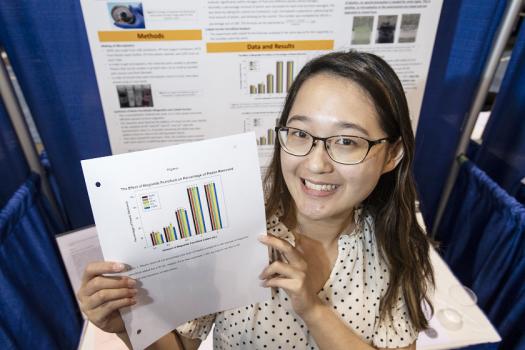 It takes a lot of self-reflection and understanding of what went wrong. Again, failure is not bad, but that doesn’t mean it feels good. I usually regroup and look over what I personally could’ve changed about myself and then remember that there are always some things that I can’t control. Always look on the positive side! A failure now doesn’t mean you’re a failure. You never know when your success will come or what form it will take.

What is something that you believe people should be more worried about than they appear to be?

I am shocked that some people are still skeptics about climate change. It is real, it is dangerous and it is one of the most important issues of our generation. Curbing carbon emissions isn’t a “should”, it is a “must” to continue living the way we do. Additionally, people aren’t really worried about their personal impact on the Earth in terms of littering, using plastic excessively or wasting resources. If we don’t curb harmful human activity before it’s too late, it will be a problem that affects all humans, not just those that contribute. Already, 300 million people in Bangladesh are displaced by rising sea levels; billions of dollars of infrastructure are at risk.

I play Tetris! It sounds really nerdy, but it’s really fun. I also hang out with friends and watch YouTube—specifically BuzzFeed Unsolved and The Big Bang Theory.