The Research Teachers Conference, an annual event produced by the Society for Science & the Public, is a weekend inviting teachers from all around the country to teach them how to curate research programs at their schools. The conference consists of two main events. One event is Capitol Hill Day, where teachers have the opportunity to meet with their state representatives. The other is the main conference, consisting of break-out sessions and Q&A panels.

Kumar Garg, former Senior Advisor to the Deputy Director at the White House Office of Science and Technology Policy (OSTP) under the Obama administration, delivered this year’s ­­influential keynote address. Kumar stressed how important a day like Hill Day is, particularly for those with boots on the ground, to express their experience in the education system and really advocate for the importance of science—especially in today’s climate, where scientific illiteracy runs rampant, even in the most senior levels of government.

Kumar’s keynote title, Eyeballs in the Fridge, was inspired by a research paper that interviewed scientists on pivotal experiences that shape how their spark for science began. One of the scientists interviewed on the project said his fascination with science began with something simple: being intrigued upon discovering animal eyeballs his brother had stored in the family fridge for a high school science experiment. Kumar also touched upon a number of topics such as the changing perception of science in society as well as how best for teachers to communicate what they need to their elected officials and community leaders.

Some challenges facing science literacy in the US by students and their parents stem from a lack of interest and participation. Kumar expressed that the current Administration seems to be absent on the issue and does not have STEM literacy and education high on their list of priorities.

Angel Ballard, a teacher from Washington DC public schools, said, “I think visiting our Congressional representatives is a really impactful way to enact positive change in our leaders.” Angel added, “Being able to go directly communicate what our issues are is a very powerful way to make change happen.”

As a former education lawyer, then serving in a variety of roles in the White House OSTP, Kumar is well-suited to educate the public on how to best advocate for STEM. 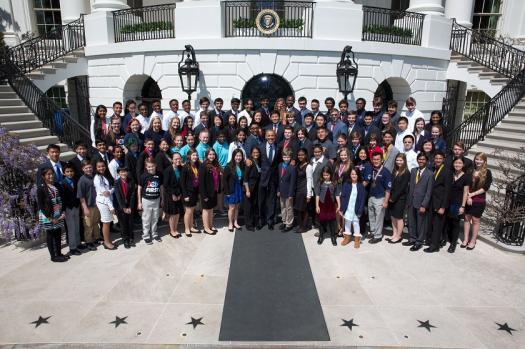 Kumar opened his speech with the acknowledgement that science doesn’t often get the same respect as other core subjects. In his opinion, parents are more willing to think that reading and writing are a must-have, but not math and science. Interestingly enough, Kumar pointed out that computer science has strong parental interest.

Kumar encouraged leveraging this emphasis on computer science, and broadening the lens to all types of science. Though at first some may be uninterested in the “hard sciences” of chemistry, mathematics and physics, the fact remains, that an interest in any science can be further fostered and developed.

During the Q&A portion, one teacher fondly recounted his experience of Kumar’s White House work and his continued relevance, saying, “I remember during one Super Bowl, Obama came on the television and said, ‘We always congratulate the winners of Super Bowls, but we also have to congratulate science fair winners.’”

The teachers’ statement illustrates a broadly shared sentiment at the meeting about how important it is nurture and encourage budding scientists. These young minds will shape the future and it is vital to encourage, support and fund them.

In regards to equity in STEM, Kumar emphasized the importance of making STEM fields accessible. He explained that widespread interest can be drummed up in students, parents and society, but the conditions are not always there for everyone to capitalize equally. The gap is widening between what parents of different economic means are able to allocate towards their children’s education. This can be both big and small: such as having the time to shuttle children to investments —like tutors and private schools.

In addition to funds, another obstacle in the accessibility of STEM fields is how “cool” children believe it to be. Peer pressure can be a huge factor in children not gravitating towards STEM education for fear of being made fun of. However, Kumar notes that the acceptance of STEM has increased in recent years, especially with more and more schools dedicated exclusively to STEM.

The most important takeaway from Kumar’s speech: interest in science has to be fostered and developed, and we can all play a part.