What are the genetic rules for the X-Men and witches and wizards in Harry Potter?

Two Science News and Science News for Students writers explored this and more on several panels at a recent conference in Atlanta, Georgia called DragonCon. This year, more than 77,000 people attended.

Read our interview with Bethany Brookshire and Tina Hesman Saey below about their panel and the fun of geeking out together. 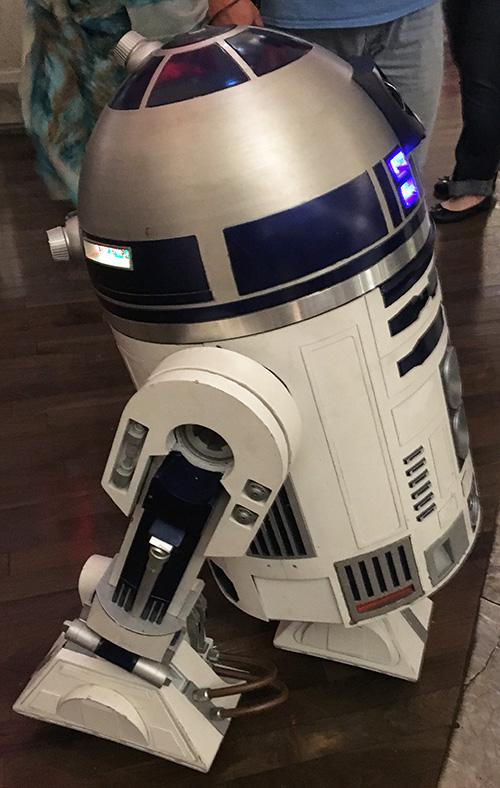 DragonCon attendees don’t only dress up as their favorite characters — some build them, including a homemade replica of R2D2.
PHOTO COURTESY OF BETHANY BROOKSHIRE.

Bethany: DragonCon is a massive sci-fi and fantasy convention that covers all things geek. It’s a wonderful celebration of people who are obsessed with imaginative worlds. You’ll see Harry Potters walking next to Jedis, Wolverines, and Sailor Moons. People gather to celebrate and nerd out over the things they love.

I drew the family tree of Sirius Black, looked at the phylogeny of Pokémon.  —Bethany

And those people include me! As a former scientist myself I can testify that scientists have always been pretty geeky. I mastered the Spock handsign at 10 and love reading about imaginative worlds. And it turns out the reverse is also true, geeks are pretty sciencey.

So why not combine the two, and help people who love sci-fi and fantasy feed their science love? DragonCon has a science track, which runs panel after panel of science-related topics, from the year in science to how genetics in Orphan Black might really go down. Most of the panels are packed to the doors. It’s a great opportunity to reach new audiences, especially young people. They see Tina and me up there and see that we love science, but we are totally nerds, too. And if they identify with us, they are more likely to want to check out what we do!

When science writers like us who respect and share in the fandom get out there and speak, we are seen as experts.  —Tina

Tina: These conferences expose us to an audience that loves science fiction and fantasy and often want to know how close we actually are to building a transporter/cloaking device/light saber or to cloning a human. When science writers like us who respect and share in the fandom get out there and speak, we are seen as experts who are providing some real science and feeding curiosity, while completely getting why people love these fictional worlds so much. If we are able to feed that curiosity and satisfy it with facts, those people may seek out the magazine to learn more in the future. 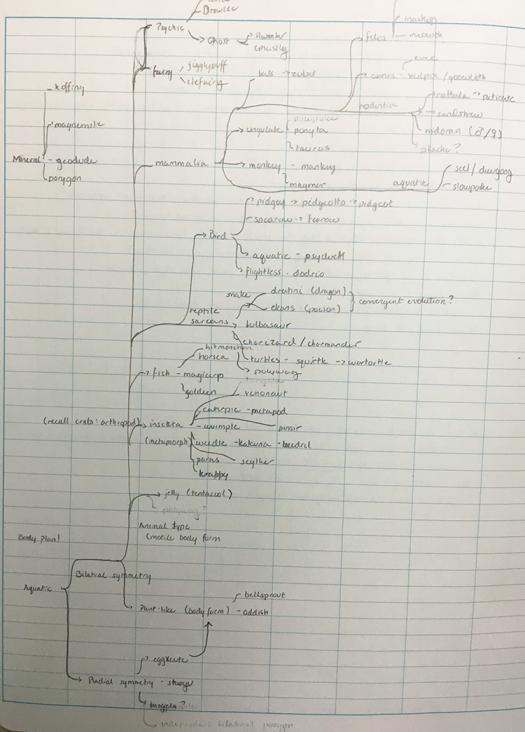 Bethany drew a phylogenetic tree of Pokémon, showing how various groups might be related to each other.
PHOTO COURTESY OF BETHANY BROOKSHIRE.

Tell us how the panels went!

Tina: The audience asked us great questions and really engaged us in debate: such as how we explain that one of Magneto’s four children is not an X-man if the X-gene is a dominant trait and how we’d explain Jane Grey’s multiple abilities. We even addressed whether humans and aliens could really mate and produce offspring.

I was on four panels. I talked about CRISPR and human germline editing on a panel called Addressing Concerns About Science. In the Personalized Medicine panel, I discussed sequencing your genome and determining your disease risk, the role of the microbiome in health and disease, and personalized nutrition. On the panel called Impractical Immortality, we addressed whether a head transplant would work (the consensus was no), anti-aging therapies, and the social and ethical challenges of people living much longer than they currently do. For all of these panels I was able to draw on much of the recent reporting I did for the Aging special issue and my regular beat coverage. A few times I had to step in to translate what some of the scientists on the panel were saying.

Bethany: I was actually on a grand total of six panels this year, from covering the Year in Science So Far (where we all had a bell rung at us periodically and had to run on and off the stage, while trying to tell everyone about Zika and Planet 9) to Genetics in Science Fiction. I was also on panels about science in fantasy novels, personalized medicine, engineering intelligence, and even a late-night panel called The Quantified Vagina.

I had people tell me after Genetics in Sci-Fi that it was the best panel they’d been to at DragonCon this year. Considering we were up against famous actors and actresses, that was high praise indeed!

For each panel, I spent as much time as I could preparing. I didn’t just prepare the scientific facts I would need, I also prepared things that tied those facts to geek and nerd references. For Genetics in Science Fiction, I looked at Harry Potter, papers written on the genetics of wizardry, and even drew the family tree of Sirius Black (who had a non-magical Squib two generations back in the family line). I also looked at the phylogeny of Pokémon, how various groups might be related to each other, and tried to draw up my own phylogenetic tree. Tina prepared comments on Orphan Black, a TV show about clones. The biggest pressure isn’t even getting the science right! I know I can do the science, but you miss one tiny thing about Pokémon eggs and the audience is going to let you know. 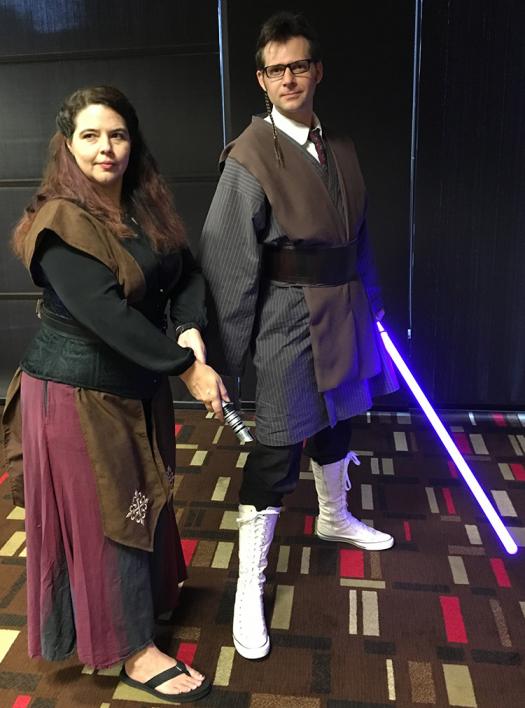 What was the best part of DragonCon?

Bethany: For me the best part is just seeing the enthusiasm. Everyone is there because they love something. Maybe it’s Harry Potter, or science, or Star Wars, or Game of Thrones, or something so obscure only about 20 people have ever heard of it. But they love it, and DragonCon is a place where they can show that love openly and have other people appreciate it. It’s like watching people at a stadium to cheer on their favorite sport and players, except in this case it’s a book series and its characters.

People want to know if we could head to Proxima b or grow potatoes on Mars. And that means they don’t just want to know the sci-fi, they want the real science behind it.   —Bethany

Also, many people cosplay — designing costumes of their favorite characters. People will spend years making R2D2s that move, metalworking real armor, and making their clothing light up. It’s just lovely to see all the hard work and creativity on display.

Tina: I loved every part. For all of the panels I was on, the room was full of people with interesting questions, including people who stuck around after the panel to talk more with us. I really enjoyed interacting with the audience.

DragonCon has a completely different vibe than other conventions I have been to. The majority of people who attend are dressed as one of their favorite characters. At DragonCon, the atmosphere is a giant party where everybody is marveling at everyone else’s creativity and cleverness. It’s a very laid-back, open and accepting environment.

Since I was going to talk about Orphan Black, I should dress as one of my favorite clones. I felt transformed.  —Tina

I have worn Halloween costumes, but I’d never cosplayed as one of my favorite characters before. I decided that since I was going to talk about Orphan Black, I should dress as one of my favorite clones from the show. Several people recognized me as Cosima and that felt good. When I put on the wig, fake nose ring and glasses I felt transformed into Cosima. I thought I would feel self-conscious, but I felt right at home along with all the cosplayers there. I’m already thinking about how to improve the costume and other ones I want to make.

Do these science tracks and panels mean science is getting cool?

Bethany: In the past few years, geek culture has gone from something people mocked, to something that is almost cool. And with it, science is getting cool too. People want to know if we could head to Proxima b or grow potatoes on Mars. And that means they don’t just want to know the sci-fi, they want the real science behind it. I love that enthusiasm!

The New York Times and Science News are accepting submissions for the 2022 STEM Writing Contest!