Laura Sanders was having a blast as a creative writing major at Vanderbilt University — but something felt wrong. “It was fiction writing, and we would just make up stories and have seminars and have a lot of fun. Halfway through I thought: Maybe I should add science.”

Smart move. Now the neuroscience reporter for Science News (which she became after adding a biology major and going on to get a Ph.D. in molecular biology from University of Southern California), Laura’s having even more fun covering one of the most dynamic scientific fields around. “I love that I get these quick hits of people doing the most exciting work at the height of their careers,” she says. “The papers we’re reading and the stories we’re finding are the best of the best.”

Read on for our 60 seconds with Laura — and learn the right way to dissect a fruit fly’s brain, not to mention whether or not you should do a DIY electrical stimulation on your brain. 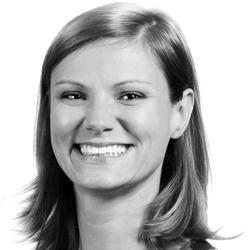 Laura Sanders is the neuroscience reporter for Science News.

THE BOREDOM OF MATING FRUIT FLIES: In the USC lab I studied how genetics can specify mating behavior in fruit flies. I had to watch literally hundreds of hours of slow-motion video of flies doing their mating dance — they follow each other, then the wing, then some tapping. There were a lot of jokes at first — then reality set in: Wow, this is going to be a long project. Of course, after I graduated, one of the computer science guys came up with a program that logged all the movements from the video automatically.

HOW TO DISSECT A FRUIT FLY BRAIN: I was very skilled — I don’t want to brag too much, but I used to train people. The trick was — you had to pin down one part of the brain, but if you didn’t do that right it was going to rip right in half. You use a microscope and these really thin, sharp forceps. Finding that sweet spot to stick the forceps was the key. No one appreciated that.

WHAT SHE’S LEARNED ABOUT PARENTING (AND EATING PLACENTAS) FROM WRITING THE GROWTH CURVE” BLOG: That science really doesn’t give us good answers about a lot of parenting issues. In a lot of cases, there’s no data. Much of what I write for Growth Curve amounts to: They don’t really know! But here are some things to think about.

Take the eating of placentas after birth: People are very passionate about that, with very strong opinions and very strong anecdotal experiences of how it’s been life-changing for them. So the idea was: What are the risks? There are some concerns to think about. But the predominant thing I found is: We don’t know anything about it.

In a way, that’s a freeing message: There’s no right answer, so figure out what works for you and your family.

EVEN FOR VACCINES? That’s an area where there’s no gray zone. They’re so clearly helpful — better for society and better for your kid. There’s no debate there.

PARENTS AND THE PLACEBO EFFECT: My post about the myth that sugar makes your kid hyper got a lot of hate mail from people who said they had empirical experience — which is of course very different from a controlled scientific experiment. The experiment doesn’t negate your observation of what your kid does.

DIY BRAIN HACKING: One of my favorite stories was the one I wrote about at-home brain stimulation. The equipment is very simple — you just need some electrodes and a 9-volt battery and some lead wires. There’s an at-home brain stimulation community that’s hacking their brains with this approach — they want to make themselves smarter, or fix depression or ADHD.

I’m really excited about the development of new tools to observe and manipulate the brain.

It’s an old idea, and it’s also behind the explosion of nootropics — the naturally derived pills designed to improve cognitive function — or all these brain-training companies like Lumosity are now out there. There’s science that says you can train your brain for specific tasks, but it doesn’t generalize. And there’s no evidence yet that nootropics help.

A researcher wrote me and said: ‘Science News is the only magazine on my desk. It gives me everything I need.’ That’s our goal.

THE NEXT BREAKTHROUGHS IN NEUROSCIENCE: I’m really excited about the development of very powerful new tools to observe the brain and manipulate the brain. The technology in the past year that has come out is amazing — every week there seems to be something out that is a potential breakthrough. The technology of eavesdropping on the functioning brain will be huge.

WHAT SETS SCIENCE NEWS APART: Our profound respect and awe and love for science. Our reporters have been covering their beats for a long time, and we don’t just report on the paper. We run it by other experts in the field and ask: Is this crazy? Is this trash? Is it good? They give us that informal peer-review, that gut-check that makes for many more voices and a much richer story.

I get notes from researchers — one wrote me and said: “Science News is the only magazine on my desk. It gives me everything I need.” That’s our goal.