According to the World Health Organization, an estimated 785 million people across the globe do not have access to clean drinking water. Stanford freshman Braden Milford (STS 2019) is concerned about alarming statistics like these. During a family camping trip in Colorado’s Rocky Mountain National Park, he came across a heavily polluted river. The river ran deep red and orange and Braden realized that nothing about the sight was natural—its beauty was ravaged by neglectful industrial practices and indifference.

“After contemplating silently along the trail, I returned home and researched the cause of the pollution. I learned that acid mine drainage and heavy metal contamination were the cause,” said Braden. “The tainted water we saw on our backpacking trip would end up in a reservoir and be used by Denver’s citizens—their health and wellbeing are at risk.” To address this problem, Braden invented organic beads—similar in appearance to bubble tea or bath beads—with the purpose of clearing pollutants and making clean water available to those in need. For this project, Braden received the Society’s Community Innovation Award, given to science fair participants who are using STEM to make a difference in their communities.

“Receiving this award is an incredible honor,” Braden said. “By conducting scientific research in high school, I have been able to discover a passion for science, meet some of the most distinguished scientists in the world and befriend determined students from across the country!” 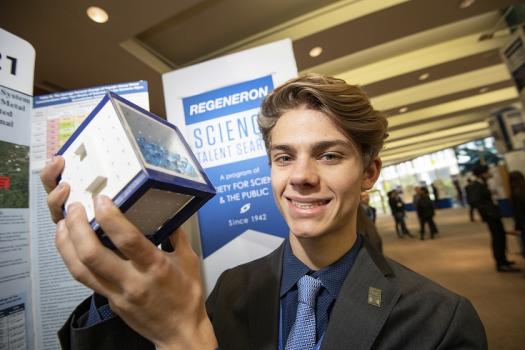 Braden holding his SymBeads during the 2019 Regeneron STS public showcase of projects.
PHOTO COURTESY OF SOCIETY FOR SCIENCE & THE PUBLIC

From October 2017 through March 2018, Braden worked in the lab of Mohamed K. Fakhr, Associate Professor of Biological Science at the University of Tulsa, to develop special beads called SymBeads. The dissolvable beads combine bacteria and algae with a substance called sodium alginate, a compound that acts as a thickener. Together, the algae and the sodium alginate form a symbiotic relationship that promotes the growth of a bacterial biofilm in the water, which can then absorb a wide variety of pollutants, such as heavy metals and agricultural runoff.

Braden designed individual beads by collecting water and soil samples from Tar Creek Superfund in Oklahoma and the Pennsylvania Mine site in Colorado—mining sites with a high presence of heavy metal pollution. By sourcing samples from bodies of water polluted with different substances, Braden cultivated bacteria resistant to that pollution. After identifying the resistances for collected bacteria, Braden crafted a large collection of beads effective for absorbing and clearing pollutants from any body of water. Additionally, Braden designed and tested a 3D printed flotation device, built to introduce the beads into an active stream.

After testing 300 beads in 6,000 liters of water over an eight-week period, Braden found that within two weeks, his SymBeads could remove over 90% of the pollutants in any freshwater system. The solution is also affordable – Braden found that his invention would cost less than $20 for 1,000 beads and the implementation device. 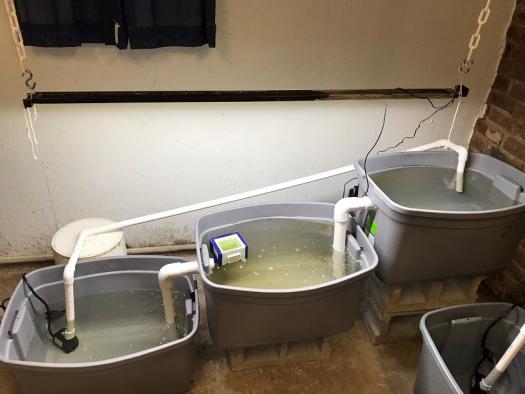 Braden tested his invention’s ability to clear pollutants in a simulated body of water.
PHOTO COURTESY OF BRADEN MILFORD

“Water is a resource that every single person needs to survive,” said Braden. “Research has shown that over half of the available freshwater on Earth is contaminated. There has never been a more crucial time to develop innovative methods of removing contaminants from water to ensure the safety of the human population and environment.”

Braden is so passionate about research and science fairs that he started his own fundraising campaign when he learned that science fairs were being defunded in his home state of Oklahoma.

“I plan to continue to raise awareness about the importance of science fairs across America, with a special emphasis on rural areas. Science fairs could be the only opportunity students in rural areas have to learn about everything a career in STEM has to offer,” Braden shared. “I believe that the life-changing experiences I have been afforded through science fairs and research should be available to every kid in the United States.”