On this Throwback Thursday, we are republishing the following Society Update from the March 30, 2019 issue of Science News.

Maya Ajmera, President & CEO of Society for Science & the Public and Publisher of Science News, sat down to chat with Thomas Rosenbaum, President of the California Institute of Technology and an alumnus of the Westinghouse Science Talent Search. We are thrilled to share an edited summary of their conversation.

You’re an alumnus of the 1973 Westinghouse Science Talent Search. How did the competition impact your life and are there any particular moments that still stand out for you?

While the process of putting together an independent project had its merits, what really sticks with me is the experience I had in Washington, D.C. The competition interviews, for example, taught me to have the courage of my convictions. I had prepared myself to defend my project, but really the questions ranged well beyond that. It was a little painful, to be honest.

At some points the judges asked questions where I really did know the answer. One that’s still fresh in my memory was about solar wind. I answered that it was charged particles from the sun, which was correct. They were very skeptical and pushed back, asking me “What are you talking about? It’s photons.” But I knew the answer because I knew about the importance of the magnetic field in the Earth to deflect the charged particles.

I realized at that point the judges were not only looking for knowledge of facts, but also the ability to explain why you were saying what you were saying, and as I said, to have the courage of those convictions. As you go on further in the sciences, you learn the art of argument. You learn to defend your positions. You learn to listen well because sometimes your positions are not correct. That was really the first experience I had in that way, so it was seminal for me.

The best part of the competition was the relationships that I developed with the other competitors. Under this pressure cooker, you make connections quickly and they were long lasting.

You are a national leader in the academic world. Can you tell us about that journey and how that path led to your current position as the president of Caltech?

I can’t claim that it was any great planned path. I was a physics major in college and earned a Ph.D. in physics. I am an experimentalist and continue to do science. I still have a laboratory and graduate students. Along the way, you’re asked to do certain things for the commonwealth to help your colleagues. It started for me with running the Materials Research Laboratory at the University of Chicago, where I joined the faculty straight out of grad school.

Then I was asked to do more serious administrative jobs, including being provost at the University of Chicago in 2007. I enjoyed interacting with really smart people who did completely different things. That part was fantastic, and I enjoyed those aspects of the job enormously. You have an excuse to talk to people that otherwise you might never learn from. I wasn’t actually looking for a presidency, but when Caltech came up, I was encouraged to apply. I did and decided that maybe I could do something good and influence the direction of science in a place that really can change the world.

What has Caltech done recently to continue to provide a unique and productive environment for the training of future innovators, scientists and engineers?

I can pick out two aspects that I think are very important, and in a lot of ways describe my job. The first is maintaining a strong culture where people can come, dream big and do wonderful things. We provide the resources to let them do that. It’s an attitude about what you can accomplish in science.

The second part is focus. Caltech is unusual in that we actually don’t try to get bigger; we try to get better. We’re constantly evaluating what the important scientific and technological problems are, and we take big bets. We try to operate in a way where we identify the most important issues, focus on them and invest broadly across disciplines in search of solutions to big problems. 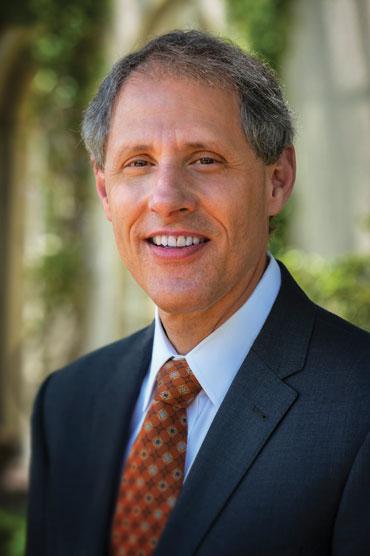 You recently announced in 2018 a new visual culture program launching at Caltech. What role do you think the arts play on your campus as well as in a STEM education?

I firmly believe that the humanities and the arts are essential for forming well-rounded human beings who develop passions in life and can contribute to society broadly. We teach the arts, social sciences and humanities rigorously at Caltech. It’s an important part of our curriculum. I would argue that it also makes you a better scientist because the arts allow you to step out of a particular subject and look at it from a different viewpoint.

When you were inaugurated as Caltech’s ninth president in 2014, you sent a command order to the Curiosity rover on Mars. What was that like?

As you know, Caltech runs the Jet Propulsion Laboratory for NASA. On the morning of my inauguration, I went out to JPL, and I gave a talk there. At the end of the ceremonies, this robot comes rolling across the stage toward me, and it’s holding an iPad. In the middle of the iPad is this big red button. It stops in front of me, and now I have the decision, do I push this red button? Who knows what’s going to happen?

Having faith in my colleagues, I pushed the red button. They told me that I sent commands to the Curiosity rover that day, telling it where to move, where to take photos and so on and so forth. Fortunately, nothing went wrong that day, so I could fully enjoy the experience.

What character traits do you look for in prospective students and faculty at Caltech?

We look for fearlessness: individuals who are unafraid to try hard things. We look for people who will reinvent themselves. That is, if they find a problem that’s important, even if it doesn’t match their skill set at present, they will master the right background, talk to the right people and reinvent what they can do. We look for that flexibility of mind and purpose. I do want to emphasize there’s no one answer. The wonderful thing about environments at places like Caltech and our peers is that you meet colleagues and students who have very different ways of approaching problems. Sharing those approaches, those different backgrounds and the diverse perspectives that come with them is what leads to progress.

At Society for Science & the Public, we want every student to have the opportunity to be a scientist or engineer if that’s what they choose. Do you think the United States is doing enough to foster the next generation of STEM leaders?

I think the role of the Society is exactly right. But I think we need to do more to make the case about the excitement for science. There are lots of stereotypes about science that just aren’t right. There’s this notion that science is a solitary life, that you wear a white coat, go into a basement lab, work for years and occasionally you come out to see the light and be dusted off. It is in fact a remarkably interactive experience to be a scientist. You basically run a small business if you run a laboratory. You intersect with colleagues around the world. You speak the same language that cuts across international boundaries. You ask questions that are compelling and obsessing.

What advice would you give to young people just starting higher education or an early professional career?

I would say enjoy it. You can do anything. But you should note that the path can be meandering, so you shouldn’t worry if you’re not going straight from point A to B. In fact, the detours are sometimes more influential than the endpoints.

What books are you reading right now?

I just read Hanna Holborn Gray’s memoir, An Academic Life. It is a remarkable story of generations of European academics leaving Nazi Germany and reinventing their lives here in the United States. She also writes a lot about the role universities can play in societies, the importance of seeking truth, of academic freedom, of creating community, of the importance of immigration and the way it can transform societies for the better. On my nightstand there’s always a stack of New Yorker magazines. I am never up-to-date, but I am trying.

The world faces so many challenges today. What keeps you up at night?

The free movement of people and ideas has been the secret to scientific progress. It has, I would argue, been a competitive advantage for the United States that really smart and creative people from around the world have chosen to come here and contribute to society. We’re going through a period now where we’re seeing a curtailment of these possibilities. I think it’s bad for science and it’s bad for the United States. The other one, of course, is climate change. I won’t be very original here, but I really do worry about what kind of world we’re leaving for our children and our grandchildren. It’s a hard problem because we have to act now for effects that will not show up completely, or in their worst form, for decades. Society is not very good at addressing such problems.