She ran around at age six “with rocks in my pockets,” pretending to be a paleontologist.

Her high school biology teacher told her mother “it would be a waste” if she didn’t go into science as a career. (But she’d already decided to do that, anyway).

So she majored in biology in college — where one research project had her make antibodies for so many rabbits that now just touching their fur makes her break out in hives. And then onto Ph.D. work in biology at Washington University, with a Fulbright Fellowship thrown in for good measure.

And just as she’d gotten her doctorate, Tina Hesman Saey walked away from that lifelong ambition to become a scientist … to write about science instead.

And it’s worked out just fine: Tina’s become an award-winning reporter for Science News, covering stories such as getting her gut microbiome analyzed, the replication crisis for scientific research, and whether the placenta is the frontline of a battleground between mother and fetus.

Below, Tina talks about trading in her lab coat for a Livescribe pen (her favorite reporting tool),  why she thinks Science News is tops in science reporting … and her strange collecting hobby. 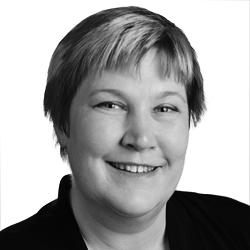 COOLEST SCIENCE EXPERIMENT IN HER HIGH SCHOOL: We went around school taking swabs and learning what microbes were growing in different rooms. Let me tell you: the boys’ locker room was lousy with all kinds of stuff when we put it under a microscope. The girls’ locker room was clean, comparatively.

WHY SHE DECIDED TO BECOME A JOURNALIST (IN THE MIDDLE OF HER Ph.D. WORK): I was getting bored in the lab, just doing the same thing over and over again, studying one very narrow thing that probably me and only five other people on the planet cared about.

I’d always loved science magazines like Discover and Omni, and I was really good at extemporaneous speaking in high school speech and drama — I went to state every year. That’s sort of what journalism is like. But I never thought I could be a science journalist — I was just a biologist. Then I heard about a science writing program at the University of California-Santa Cruz and I just thought, I’m going to do that.

HOW SHE BLEW HER FIRST DEADLINE: I pitched the student newspaper at Washington University a story on another student’s new study on the effects of alcohol on the brain, and the editor said yes. But I blew the deadline because I had to have emergency gallbladder surgery.

I called the editor after I was out of surgery, and I said, “I’m really sorry — I’m not going to be able to turn the story in tomorrow.” She gave me an extension.

FAVORITE STORY SHE’S WRITTEN FOR SCIENCE NEWS: The one I wrote about how important the placenta is. The placenta is on the front line of a little war between the mother and the feus, and usually the placenta wins. It’s amazing how that whole thing comes together and that anybody is ever born.

HOW SHE COVERS SUBJECTS ON DEADLINE SHE DOESN’T KNOW MUCH ABOUT: Sometimes the best avenue is to just call up the scientist and say, “I don’t have an immunology background. I am not familiar with these type of T cells that you’re working with. Tell me about them.” But I’ve learned a lot of background over the 17 years I’ve been a science writer.

WHAT SHE LOVES ABOUT WRITING FOR SCIENCE NEWS: The editors here respect the science. I mean, there were several times when I was writing for newspapers when editors would ask me if we could “just take out the science bit.” “Can we just take out this DNA bit.” I was like: “No, it’s a genetics study.” That’s not going to happen here. They foster your interests. It’s probably the best place to be if you’re a science writer.

WHAT MAKES SCIENCE NEWS SPECIAL FOR READERS: Most other places tell you what a study says. We tell you not just about the discovery, but how the scientist did it, with enough of the actual science in the study in an accessible way — and what other people in the field think, and what previous studies have found — so you can decide for yourself whether the scientists have come to a valid conclusion.

SECRET YET NOT-SO-SECRET HOBBY: I collect rubber ducks. I’ve been doing it for about 20 years. You’d be surprised at the variety of rubber ducks dressed up as other things. In my office I have one dressed like a Native American, one in a lab coat holding some test tubes and wearing safety goggles, one dressed like a Pharaoh, one wrapped up like a mummy, and one in sheep’s clothing. At home I have about 200 more.