“I would not be here without science fair.” Those were the first words Virginia Davis, a professor of chemical engineering at Auburn University, said to the audience of fair directors and teachers at the symposium titled “Building Science Fair Culture in an Educationally Diverse Region.” As an alumna of the 1985 Science Talent Search who now has a son competing in the 2019 Intel International Science and Engineering Fair (ISEF), Virginia knows firsthand how participating in science fairs can change the trajectory of a person’s life. Her passion and experience led to her involvement with Auburn University’s STEM-IQ program, an initiative funded by the National Science Foundation, to advance teachers’ motivation and ability to lead science fair projects in southeastern Alabama. 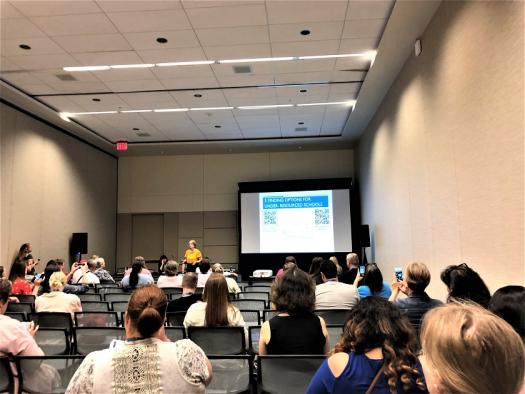 The Greater East Alabama Region Science and Engineering Fair (GEARSEF) encompasses an economically and educationally diverse district of 19 counties and 34 public school systems. Fifty-six percent of schools in the region are classified as “high needs,” meaning that more than half of the students receive free or reduced lunch and less than 95% of its teachers are considered to be “highly qualified.” However, there are also schools located in Auburn City, near Auburn University, with more resources. So how does one create a STEM education program that can benefit both demographics? In 2014, STEM-IQ set out to address this problem. Goals included increasing the number and quality of projects in the region, creating a sustainable science fair infrastructure and cultivating a culture of STEM through science and engineering fairs.

Moreover, STEM-IQ employed a number of tactics to involve administrators and create buy-in from colleagues, parents and students. Members of school administrations were invited to fairs and principals were asked to be a part of award ceremonies held for school-wide audiences. Additionally, Teacher Fellows reached out to local news media to highlight the winners of local fairs as a way to involve the larger surrounding community. 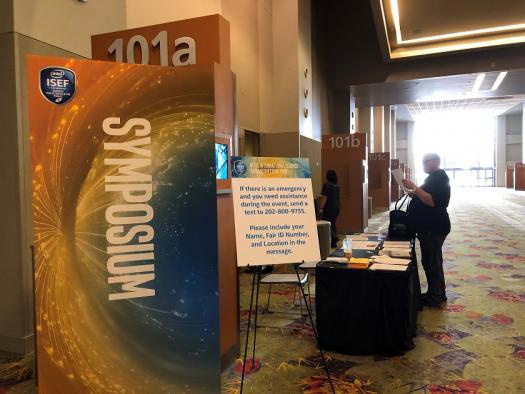 Symposia sessions are an opportunity to share information with students, parents, teachers and fair directors.
PHOTO COURTESY OF SOCIETY FOR SCIENCE & THE PUBLIC

Two teachers who participated in STEM-IQ, Jacque Middleton and Wendy Sammons, were present at the symposia to share their experiences. For Jacque, it was important to help level the playing field between privileged and under-resourced schools and STEM-IQ gave her an opportunity to do so. “I showed girls in my class that they too can do this, they can be engineers,” she noted. Wendy teaches at a more affluent school, but STEM-IQ gave her the tools she wanted to go from having a good science fair to a great science fair. “I was not trained in science, I needed the professional development to be a better teacher for my students,” she said. “Teachers want to do science fair, some just don’t know how.”

Prior to the launch of STEM-IQ, 18 schools competed in GEARSEF 2013 and they were all close to Auburn University. In 2019, that number increased to 34 schools and there was a greater diversity of students who participated. Project numbers more than quadrupled and more underrepresented students won awards. Overall, there was also a higher percentage of GEARSEF participants who won at the Alabama Science and Engineering Fair. The program made the biggest inroads at the middle school level. Although funding for STEM-IQ will end this year, Virginia has plans to further expand teacher participation throughout southeastern Alabama.