After a day full of judging at this year’s Intel International Science and Engineering Fair (ISEF), Jessica Moore was feeling pretty great.

“I learned a lot from the judges,” she said. “But I was really nervous at first.”

As a high school senior, Intel ISEF 2018 was Jessica’s first time competing as a finalist. She credits a large part of her success to Elizabeth Proctor, who has been her teacher at Jasper County High School in Monticello, Georgia since the ninth grade.

“Anything that I know about research or biology, it’s because of her,” Jessica said.

Elizabeth has been a participant in the Society for Science & the Public’s Advocate Grant Program since 2016. As an Advocate, she encourages underrepresented and underserved students to pursue scientific research and enter science fairs. This year, she will serve as a Lead Advocate, overseeing a group of newer Advocates.

The program has helped her bring several students, including Jessica, to Intel ISEF over the past couple of years. But Elizabeth stresses that Jessica truly advocates for herself.

“She’s not afraid to ask for something when she needs it,” Elizabeth said.

Jessica, who plans to attend the University of Georgia in the fall, is relentlessly cheerful.

It’s such a good experience to meet people you don’t know.

“When things would fail, she would smile and say, ‘It’s okay, Ms. Proctor! I’ll just try again.’ She is dedicated and hardworking,” Elizabeth said.

Jessica embarked on her scientific research journey after reading a Science News article on lichens. The subject of lichens fascinated her. Her Intel ISEF project is titled “Comparing Lichen Phenotypic Expression with Genomic Verification.” 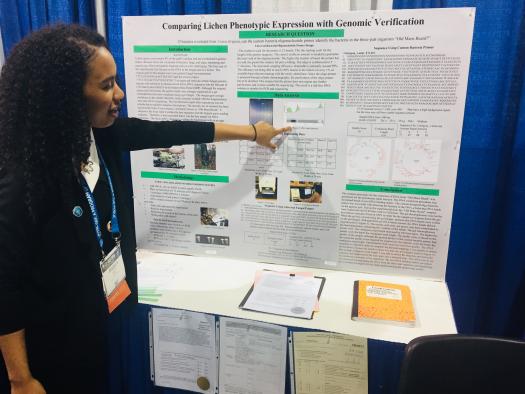 Jessica Moore explains her project at Intel ISEF 2018.
Photo Courtesy of Society for Science & the Public.

Lichens are composed of bacteria, fungi, and algae. Jessica explained that it has not been genetically sequenced because of its complex DNA. The goal of her project was to obtain the lichen DNA and create a new DNA primer to obtain a sequence to contribute to the Barcode of Life Database.

Anything that I know about research or biology, it’s because of her.

Like any scientist conducting research, she experienced both challenges and successes along the way.

“One of the biggest challenges was collecting the data and learning how to use it and apply it,” she said.

In Pittsburgh, Jessica had the opportunity to meet nearly 1,800 other finalists competing in Intel ISEF.

“It’s such a good experience to meet people you don’t know,” Jessica said. “It is inspiring learning about what inspired the other finalists to pursue their projects.”

She especially loved the social mixers at Heinz Field, as well as watching Inventing Tomorrow, a film about Intel ISEF finalists from the previous year that premiered at the Sundance Film Festival. Elizabeth enjoyed the film as well.

“I just about cried,” Elizabeth said.

Whether watching a film about students improving communities with their science fair projects, or talking with students like Jessica in Pittsburgh, it’s hard not to tear up a little bit. Intel ISEF finalists like Jessica, supported and guided by Advocates like Elizabeth, are changing the world–and the future–for the better.

Being an Advocate has changed my trajectory in the classroom

“Being an Advocate has changed my trajectory in the classroom. For the first time in my career, I will not be teaching a required science course such as physical science or biology. Instead, next year I will only be teaching research courses. This drastic change was due in large part to the Advocate program,” Elizabeth said.