Data science is super hot. So are startups. So that means Michael Li — an Intel Science Talent Search (STS) alumnus and CEO of The Data Incubator, a two-year-old data-science startup, is on fire.

In retrospect, Li’s path to data-science entrepreneur seems obvious — he got a B.S. in computer science and Ph.D. in applied mathematics from Princeton University before moving to a career on Wall Street and then Silicon Valley. He’s worked at companies such as Google, Intel, Foursquare and Andreesen Horowitz, a renowned Valley venture capital firm.

But Li credits his 2003 Intel STS experience — in which he finished second nationally for developing a novel way to conduct nuclear fusion — as pivotal to shaping who he became as an adult. Read the interview to find out more — and why Li thinks academics often need post-grad boot camps to get up to the speed industry moves at. 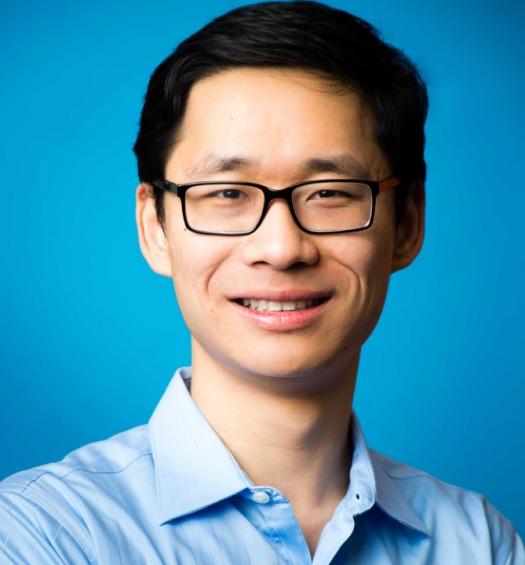 WHY IS DATA SCIENCE SO HOT? Because data is now a structural trend, right? And we’re getting more and more of it every year, and not just from your computer, tablet, and cell phone.

For example: we’re working with insurance companies that use telemetry data to track driver behaviors to determine if they are better drivers and selectively give them discounts. Companies need to process all this data and understand what it means. That requires data scientists.

Help launch the next Michael Li. Become a member of the Society today.

WHAT’S THE DATA INCUBATOR? It’s an eight-week fellowship that gives 50 masters and Ph.D.s essential skills they need to become data scientists for industry and then matches them with employers who pay for that training. We get about 2,000 applications a quarter for those 50 slots. The employers range from tech companies like Yelp, Betterment, or Foursquare to more established companies like The New York Times, Microsoft, eBay, JPMorganChase, and Pfizer.

The idea came from my experiences on both sides of the interview table. As a Ph.D. student who entered industry, I know the challenges students with an academic science background have in translating that background into something more worldly. As a hiring manager, I see people with great-looking resumes, but who don’t have science chops — the actual science knowledge, statistics, and programming really necessary to become a data scientist. 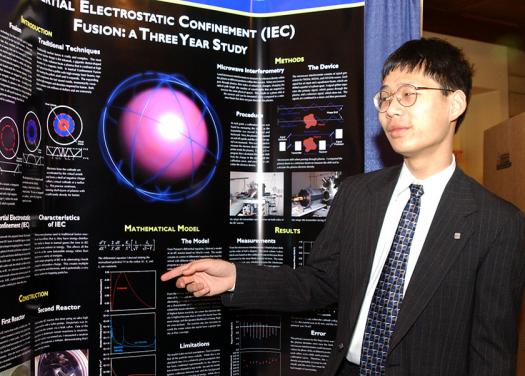 Michael developed a novel way to conduct nuclear fusion for his Intel STS 2003 project.
PHOTO COURTESY OF SOCIETY FOR SCIENCE & THE PUBLIC.

SUCEEDING IN ACADEMICS VS. BUSINESS: Our job at The Data Incubator is getting Ph.D. students to stop thinking about problems in a five-year time frame and move to thinking about them in five-month, five-week, and then five-hour time frames. Five hours is really all the time you have to think about something in industry.

Academia and industry also have very different incentives. Academia rewards you for trying to find the most cutting-edge solution, even if it’s not always practical. You’re getting trained to have very theoretically-based conversations. That’s a solid base on which to build, but in industry you have to just get something out the door, get it done quickly and it doesn’t have to be perfect — just good enough.

NOT YOUR USUAL STEM SUSPECTS: Data Incubator applicants are people with STEM backgrounds, broadly interpreted. It’s not just your usual disciplines like math, physics, computer science, and statistics. We have a lot of strong applicants with backgrounds in political science, social science, environmental engineering — things you wouldn’t necessarily think about as traditional feeder disciplines for data science.

A lot of students interested in science feel like the oddball out. But when you meet people through science, you start realizing there’s a really big community here.

INTEL STS AND “FEELING NORMAL” ABOUT LOVING SCIENCE: STS was key for me growing up. It made me realize how important science was. And it legitimized science for me in the sense that I realized I was normal in this crowd and not some sort of freakish aberration in the world. Of my entire childhood, STS is probably the place I felt the most comfortable. That was invaluable. It shaped who I became as an adult.

A lot of students interested in science feel that way in a lot of contexts — like the oddball out. But when you meet people through science, you start realizing — hey, there’s a really big community here. You’re not an oddball. That’s really important for young people.

THE STS NETWORK: A lot of my friends from high school are actually from STS. They’re some of the friends I’ve known the longest. A lot ended up in East Coast schools and applied for similar jobs. It’s a grapevine even today. We say to each other, “Oh, there’s a job opening at this company. You might want to apply.”

ADVICE FOR STUDENTS WHO WANT TO CREATE STARTUPS: Do it now. The younger you are, the fewer things you have in your life that will hold you back from taking chances.

And as a student, engage in a lot of non-profit entrepreneurial endeavors. It’s tremendously helpful to build something that matters, to see whether you can hit certain metrics and those skills are all very translatable whether or not you keep the money at the end of the day.