One organization is proving to New Yorkers of all ages that science can be found everywhere. HYPOTHEkids, one of this year’s STEM Action Grantees, received a $5,000 grant to support their flagship program, STEAM the Streets. By curating unconventional science and engineering experiences in New York City’s underserved neighborhoods, the program encourages learners to engage with science in their own backyard.

At their most recent event on July 13, STEAM the Streets participated in “Summer on the Hudson,” a month-long outdoor arts and culture festival hosted by NYC Parks.

“Along with the New York Public Library and a puppet show, we set up our table in the park for a few hours and kids stopped by to build and test their very own catapults. They launched marshmallows and noted how far they flew based on the catapult launch and the number of Popsicle sticks that were used,” said Devin Elise Wilson, Operations and Communications Director of HYPOTHEkids. “There was one little boy who created a game with his catapult. Every time he could successfully shoot the marshmallow up into the air and catch it, he could eat one! He spent almost an hour at the table with us, and when his dad said it was time to go to the grocery store, he replied, ‘Dad, I’ll be here, you can go to the store and come back for me afterward.’ That didn’t end up happening, of course, but he was completely enthralled.” 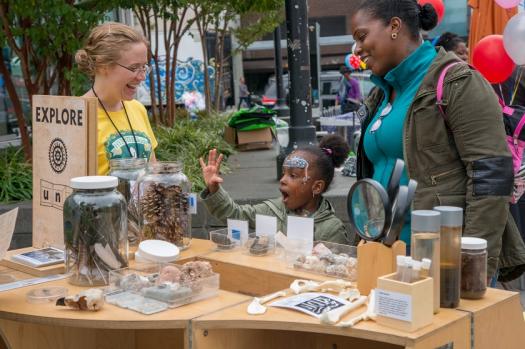 In partnership with Uni Project, HYPOTHEkids’ Explore cart pops up at many street festivals and park fairs.
Photo courtesy of Timothy Lee Photographers.

With its STEM projects, activities and demonstrations throughout the city, STEAM the Streets aims to highlight the variety of contexts in which science is relevant. “The stereotypical scientist works in a lab and wears a lab coat and goggles. We want to show students that scientific skills such as—questioning, observing and testing—can be done anywhere,” said Devin. “Learners often experience science within the classroom, when in fact science is happening all around us—from the roots of trees pushing up sidewalks, to nests that sparrows build in lamp posts, to the steam that rises up from manhole covers.  We’ve had visitors explore samples of mud and water from the Hudson and East rivers and observed the states of matter by putting dry ice into a balloon.”

Since STEAM the Streets launched two years ago, the program has reached over 10,000 people at 150 events. Central Manhattan events attract a broader audience hailing from other boroughs of the city, as well as Westchester County and New Jersey. Tourists from other countries and across the United States have also participated. 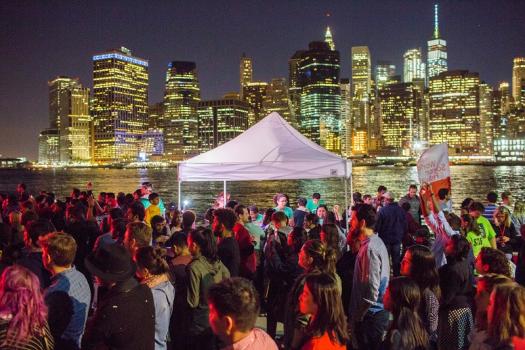 Executive Director Christine Kovich started HYPOTHEkids as a way to connect the local community to the cutting-edge science happening at Harlem Biospace, a biotech incubator she co-founded for early stage life science companies. “Harlem Biospace is part of a concerted effort by New York City to diversify its economy and leverage the research being done at its nine teaching and medical institutions. The New York City Economic Development Corporation anticipates a vibrant biotech economy in the city generating good paying jobs and career paths.”

Christine anticipates that the link between HYPOTHEkids and Harlem Biospace will function as a talent pipeline for biotech entrepreneurship that is representative of the Big Apple’s diversity. “The practical application of students’ STEM skills pushes students to be innovators. Engineering design, which we emphasize in all our programs, fosters and enhances skills for identifying and developing solutions to problems. It also encourages students to think critically about important societal challenges,” she said. “Entrepreneurship is steeped in every facet of STEM. Given how curious, creative and tenacious our students are, perhaps we will see them in the future, using their talents to solve some of the world’s most pressing problems.”