A science class can make or break a student’s decision to pursue STEM subjects throughout the rest of their lives. Janet Waldeck, a physics teacher at Pittsburgh Allderdice High School, is helping to ignite a passion for science in all students with her lending labs program, which allows teachers to check out high-tech science equipment to use in their classrooms.

“There is a big difference in the gap between richer and poorer schools, but not in the motivation of children,” Janet said.

There is a big difference in the gap between richer and poorer schools, but not in the motivation of children.

Given the constant change in science technology, it is easy for many classrooms to have outdated equipment for projects. Especially vulnerable are schools in low-income areas, who struggle to purchase expensive equipment. As budgets are cut throughout the country, the gap between schools becomes larger and fewer students are given the opportunity to experience science using new and high-tech equipment.

In an effort to bring authentic labs to all students, Janet, a recent participant in the Society for Science & the Public’s Research Teachers Conference, began assembling kits that could be used at schools in Southwestern Pennsylvania. Working with a professor at Carnegie Mellon University and the Office of Institutional Advancement at the University of Pittsburgh, she requested funding from local societies to purchase equipment. Today, there are 14 physics and chemistry kits available for use. 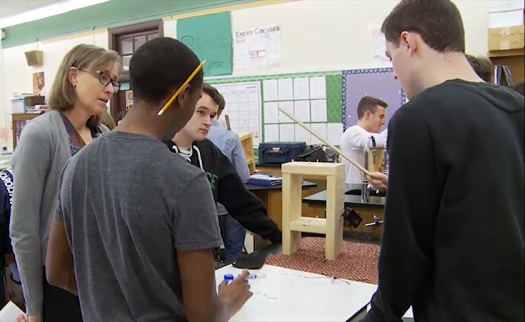 The idea first came to Janet as a participant in the Institute for Physics Teachers, run through Cornell University’s Physics Department, where she was trained to use science kits developed at Cornell that she could borrow to use in her classroom throughout the school year.

“I cannot tell you what a difference this made for my students,” Janet said. “Here was a complete activity that used current ideas that were relevant to high school physics and used real-life examples from the labs at Cornell University.”

From assembling transatlantic power lines to building an electric guitar, the kits were fun for the students, and Janet relied on them for her lessons. When she realized how much her own students were gaining from using the kits, she began to think about starting a similar program in Pittsburgh, which she launched in the summer of 2012. The kits help reinforce an interactive environment, instead of relying on a textbook or “cookbook labs.” According to Janet, teachers have reacted well to the kits, and the school system is now exploring developing kits for younger grades so that students can be exposed to hands-on science at an early age.

You want kids to have activities that are modern and address today’s questions and get them to look beyond their classroom.

“The only way to learn and connect your neurons is to interact,” Janet said. “You want kids to have activities that are modern and address today’s questions and get them to look beyond their classroom.”

For any teacher looking to adapt a similar program in their school system, Janet recommends touching base with a local university. She feels fortunate  to have had the assistance of the American Chemical Society at the University of Pittsburgh, as well as local organizations such as the Society for Analytical Chemists in Pittsburgh.

Get involved in science fairs!

Even if you’re not a teacher, you can still show your support for high-tech science equipment in the classroom.

“Get involved in science fairs! And let administrators understand the importance of getting quality science equipment into the hands of their children and schools. This is really important. If teachers are doing something, communicate what it is that is helping your child to learn,” she added.

Whether a school is in the city’s wealthiest neighborhood or one that is struggling, these kits allow students everywhere to learn with the latest science equipment.

We owe it to the kids to let everyone have access.

“There are classrooms that are really stretched for funds. It’s not easy to get equipment,” Janet said. “We owe it to the kids to let everyone have access.”