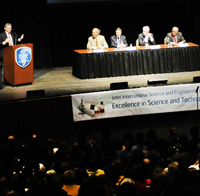 Joe Palca, a science correspondent at NPR and a recent addition to the Society for Science & the Public Board, hosted the event and took questions from the audience that ranged from the genetic engineering of food to getting involved in politics to Hershbach’s appearance on The Simpsons.

Some of the students asked where the panelists got their inspiration for ideas. “There will always be new ideas,” said Wuthrich elaborating on the replenishing nature of scientific research. “As long as you are active and you do work in science, you will always get new ideas.” The panelist seemed to agree that the bigger problem was deciding which of the many ideas out there are worth pursuing.

The panelists also seemed to agree that climate change would be a major problem to solve for the next generation of scientists. However, as Roberts noted that these problems “actually offer some wonderful opportunities for doing something new.”

When responding to the U.S.’s lagging math and science scores, Hershbach said, “Many people are afraid that America may be losing its competitive edge. But, from another point of you, you have to say, isn’t it wonderful that the wider world is becoming much more competitive in science and therefore pushing us to do still better.” He added that the encouraging thing about Intel ISEF for him was that American scientists meet new people. “Science is intrinsically international so we can be happy when it thrives anywhere in the world.”

In addition to expanding their social circles, Osheroff encouraged all the attendees to be well rounded; “You need to know a lot of science and a lot of things beyond science.” He also encouraged the students to take breaks from science and have other hobbies, such as his interest in photography. These breaks help you to go back to your project with a fresh mind and new insights.

As the panelists are some of the most successful scientists in their fields, some students wanted to know how they handled setbacks, mistakes, and unexpected results. In response, Roberts told a story of a post doctoral researcher he was working with who did an experiment and showed him the results. Roberts said that he must have done the experiment wrong and told him to do it again. When the researcher still got the same results, Roberts said, ok, I’ll do it and show you how it’s done. Of course, he then also received the same findings. “This is one of the joys of science,” he said. “When you think you are headed in one direction and all the observations and data send you somewhere else. It’s a wonderful, wonderful thing.”

Young astronomer’s research implores us to think beyond