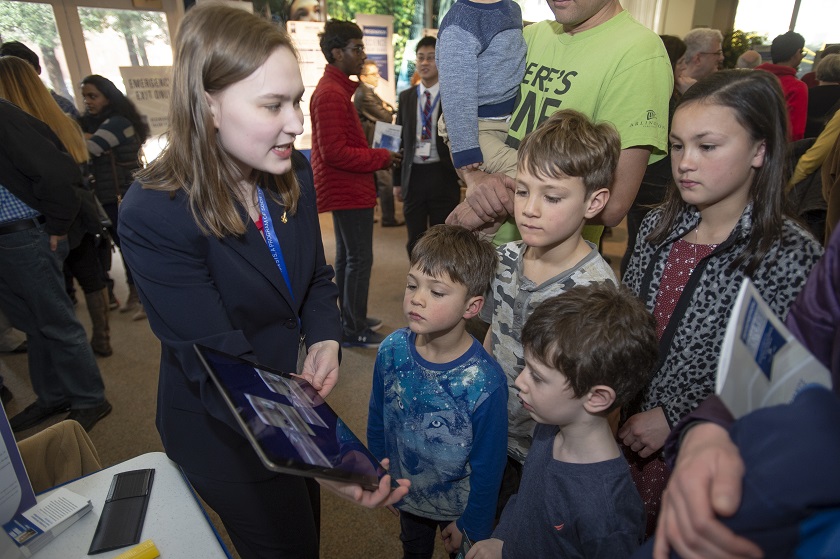 During finals week of the Regeneron Science Talent Search, 40 of the brightest, young scientific minds in the nation travelled to Washington D.C. to showcase their scientific projects to the public. We asked the top 10 winners a variety of questions to learn more about their projects, competition experience and plans for the future. Here is some of what top winner Rachel Seevers, 17, a high school senior from Lexington, Kentucky, who has appeared on outlets such as The Lexington-Herald Leader and KyForward, had to say.

Which sci-fi advancement are you upset we don’t have by now?

Well you just so happened to catch me on a day that I had a really hard math test, so maybe I’m biased today, but I’d say that learning by plugging in would be more than cracking open a textbook for a few hours. The Matrix showed us this technology, and honestly, I’m still waiting for it, and not just to get around studying for my discrete math class.

Which scientist – alive or deceased – would you want to solve scientific mysteries with and why?

Raymond Wang, winner of the 2015 International Science and Engineering Fair, world-class aeronautical expert, teenage heartthrob (at least in the science fair circles) and the reason I pursued airfoil design even when I thought I had no shot of making a difference.

I almost passed out in line for Starbucks because I got an email inviting me to present at the symposium for the Society of Experimental Test Pilots, and next to my name was his, Raymond Wang. And my answer became reality. I got to present my research to the man who made it all possible, who made me love aeronautical engineering, who instilled this passion within me.

It would be a dream to solve the newest cutting-edge problems in the aerospace community with Raymond Wang and maybe inspire others the way he inspired me.

What would you invent if you had all the money in the world?

I am an engineer through and through, so this question isn’t exactly fair. I love to think of all the possibilities out there and pursue every avenue of thought. But I’m also someone who wishes to see their creations in use one day.

I have devoted thousands of hours to developing the idea for a new airplane wing that can save lives and the environment—so much time that it feels like my child now. All I want to do is share my child with the world and see the Virtual Winglet implemented on real aircraft one day.

The moment when I see my invention on the wings of an airplane, that will be an indescribable moment. It will be the moment I can see the difference I can make in the world.

What would you like to be most renowned for?

To me, the greatest issue facing the world today is the disparity in gender balance and lack of strong, female role models in STEM. I am one of just three girls in my physics class and, for years, I was the only girl on my school’s academic team—so I am no stranger to feeling like the odd one out. However, no girl in STEM should ever feel like the odd one out.

That’s why I’ve launched several STEM initiatives to get young women engaged and interested in STEM at a young age, and why I try hard every day to become a role model for them. That’s what I want my legacy to be: inspiring the next generations of women scientists and innovators and role models.

What would you say in order to inspire the next generation of scientists?

I don’t work in a fancy lab. I work in my basement. I don’t have a nearly-soundproof supersonic wind-tunnel. I built mine out of wood and plexiglass. I don’t have a badge to swipe into classified experimental rooms. I have a rewards card to swipe at Home Depot. I don’t have the contact information of one U.S. General on my phone. I have two. Even though the work I am doing is localized between the crib my parents could never bring themselves to throw out and the long-forgotten exercise equipment from the 80s hanging around beneath my kitchen, it is still incredibly impactful. And along the way that impactful work has attracted the attention of the United States Department of Defense.

If you know amazing young scientists like Rachel who are interested in entering their original research projects in the 2020 Regeneron Science Talent Search, please sign up here.